Yesterday, from the tower of Castelo e Muralhas Castelo Branco we saw a distant line of snowcapped mountains glistening under a brilliant Spring sun. Tonight, we’d rest our heads in Coimbra, noted for its historic university and preserved medieval old town.  Though only one and half hours from Castelo Branco by highway, it would take us all day as we decided to take the back roads through the Serra da Estrela mountains to Castelo da Lousa and Talasnal, one of the abandoned Schist villages.  Schist is a shiny, earth-toned local stone that is very durable and was used extensively in the region for building. 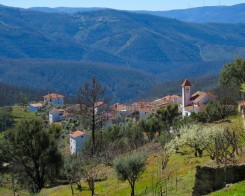 Below Torre, mainland Portugal’s highest peak at 1,993m (6,539 ft), the headwaters of three rivers, the Zezere, the Mondego and the Alva, emerge from the range and flow to the Atlantic coast. 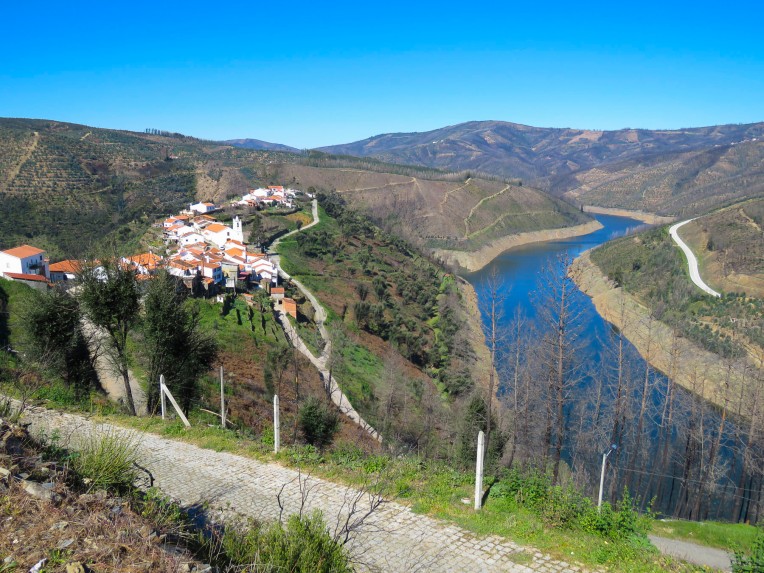 We crisscrossed these serpentine estuaries multiple times during the day as we drove through verdant pine forests along roads that hugged the curves of the land.  Isolated, whitewashed villages dotted the mountainside. 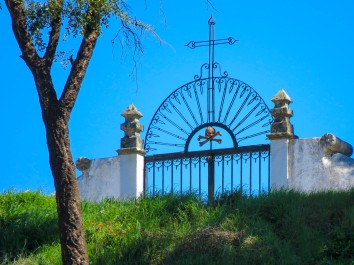 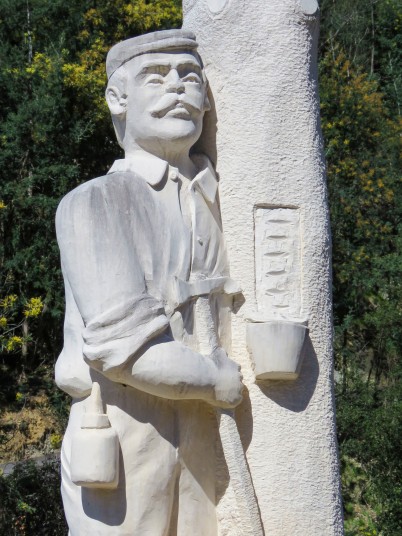 Heads turned in Foz Giraldo, Oleiros, Alvaro, Maria Gomes, Alvares and Lousa when we parked to wander around.  Early birds, we were way ahead of the summer crowds that rush to these mountains to escape the heat of the city and urban life. 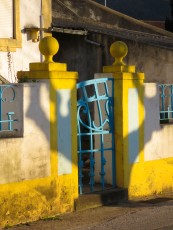 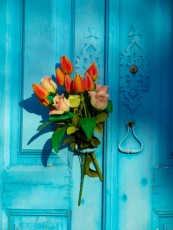 Foresters, shepherds and cheesemakers squeeze a livelihood from the land in this sparsely inhabited region. Queijo Serra da Estrela is Portugal’s most unique cheese. It’s a strong flavored, soft, raw sheep’s milk cheese still made by hand from a 2,000-year-old traditional recipe.  Firm on the outside, the wheels of cheese are lusciously creamy on the inside when young; as the cheese matures the center firms to a sliceable semi-soft texture.

We arrived at Castelo da Lousa around noon, hoping to explore the castle and nearby chapels after lunch at a restaurant adjacent to it.  Midweek and off-season, unfortunately both were closed, but we enjoyed our time walking around the base of the castle.  This small castle, dwarfed by surrounding mountains, was once a strategic stronghold along the Mondego line, a series of defensive fortresses along Portugal’s 11th century border south of Coimbra after it was captured from the Moors, deterring them from retaking that city.  The knights Templar are credited with constructing its Keep and Glacis, a ramped lower wall, along the base of the castle, designed to impede scaling ladders and ramming.  By the early fourteenth century, as the Portuguese border expanded south, the castle lost its importance and was forgotten.

As Donna was waiting for me at the foot of the castle while I went to get the car, she was approached by two weary trekkers, without water, who had just hiked down from a mountain hamlet above the castle and were expecting to lunch and relax at the closed restaurant before hiking back up the steep trail.  As crows fly, the distance from the village to the castle wasn’t far, but the return hike looked daunting without water or food.  We quickly agreed to give them a lift back when they asked if we could help them.  Our compact rental car was packed pretty full, but we pulled the seats forward and piled some bags on Donna’s lap to make room for Catia, Alain and his large backpack. ( Always wildy speculating, I wondered if they found the lost treasure of a local legend: King Arounce, who fled ancient Coimbra with his daughter and hid his riches in the mountains above the castle.) A Portuguese/ French couple, they were on a weekend getaway from Lisbon and his backpack was full of photography gear. 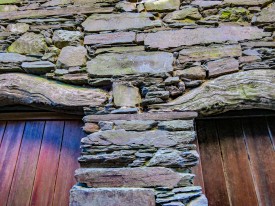 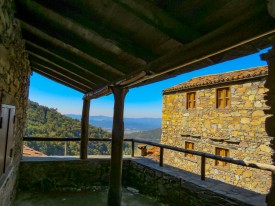 As it turned out they were staying where we were headed, in Talasnal, one of the three Schist villages above the castle. The four of us spent the rest of the afternoon at Ti Lena chatting away; their English was much better than our non-existent Portuguese.  This rustic tavern served wonderful, traditional Portuguese cuisine typical of the region, and good local wine.  This delightful, serendipitous encounter was one of the highlights of our road trip. 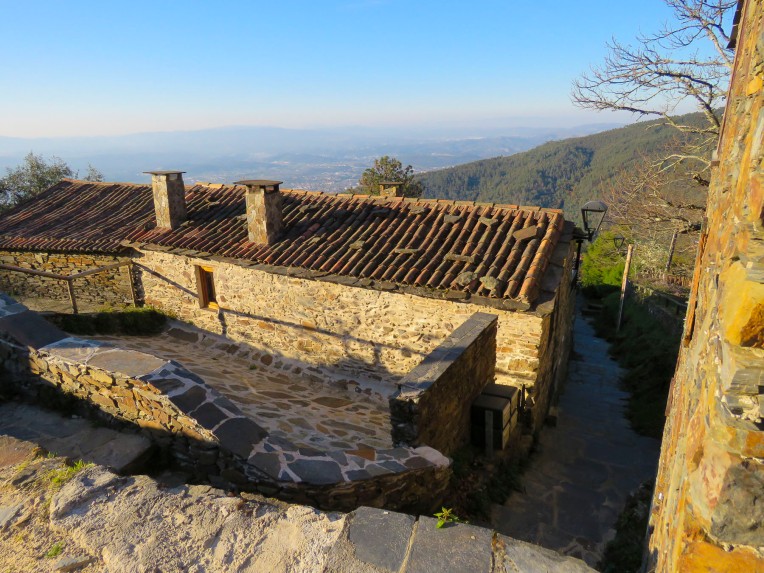 Along with Catarredor and Casal Novo, Talasnal was slowly abandoned over the years as younger generations moved away to find work.  With the rise of ecotourism these rustic villages, with their beautiful stonework, have been rediscovered by folks who want to reconnect with nature and a simpler pastoral life, if even for short periods of time.

With the help of government grants, many of the near-collapsing structures are in the process of being updated and authentically restored, using traditional building materials and techniques, into restaurants, small inns, workshops, galleries and private homes to support a growing tourist infrastructure and revitalize the area.  Across the mountainous central region of Portugal there are twenty-seven Aldeias do Xisto (Schist Villages) that can be explored.