The fertile, rolling hills between Sofia and Plovdiv have been traversed by migrating populations and numerous invading armies over the millennia. Today the A1 highway whisks an ever-increasing number of tourists between these historic cities, only two hours apart.  We were heading to Plovdiv, voted a 2019 European Capital of Culture, at the suggestion of one of our Instagram followers to “go see more of Bulgaria.”  It is the oldest city in Europe, having been continuously inhabited since 6000 BCE, three-thousand years older than Athens.  Two nights in Plovdiv then a drive over Stara Planina, the Balkan Mountains range that runs east to west for 348 miles and divides Bulgarian into northern and southern regions, to the beautiful village of Tryavna.

Just outside Old Town Plovdiv, Roots Hotel and Wine Bar was ideally located to explore the heights of the historic district and the newer, yet still old, city built below it.  Our host Mitko, an expat who returned from Canada, was an enthusiastic promoter of all things Bulgarian, especially its undiscovered wines.  Under his tutelage we enjoyed some excellent wines.  “We have a wine making tradition in Bulgaria that goes back thousands of years, but because of our recent history no-one knows of it. All the wine was sent to Russia to balance our trade deficit with them. Folks in Sofia only drink Italian wine, thinking it’s better. But ages ago even the Roman Emperors preferred wine from Bulgaria.”

Remnants of Plovdiv’s glorious past are clearly visible in the magnificent ruins of the Ancient Theater of Philippopolis which sits high on the slope of Nebet Tepe and overlooks the newer part of the city below.  Built in the first century, this Roman Amphitheatre could hold 6,000 people.  Today it is still used to host concerts and other cultural events. 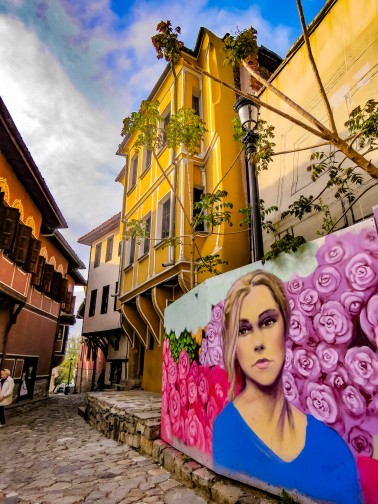 Strolling uphill to the summit of Nebet Tepe, we saw fine examples of Bulgarian Revival Architecture lining both sides of the cobbled lanes.  Sometimes the upper floors of the homes jutted out so far, they almost kissed the dwellings across the street.

Just shy of the summit, the Regional Ethnographic Museum and Saints Konstantin and Elena Church offered windows into a past way of life. 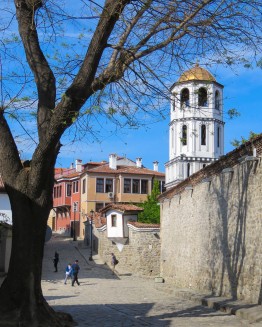 The ruins on the summit date to the reign of the Roman Emperor Justinian in the 6th century CE, but traces of earlier civilizations have also been found that date back to 6000 BCE.  The site offered a great panoramic view of Plovdiv.  Returning from the summit we were able to enjoy a late lunch outside, on the terrace, at Rahat Tepe, and sample some traditional Bulgarian dishes and cold drafts as reward for our steep hike on a warm Spring day. 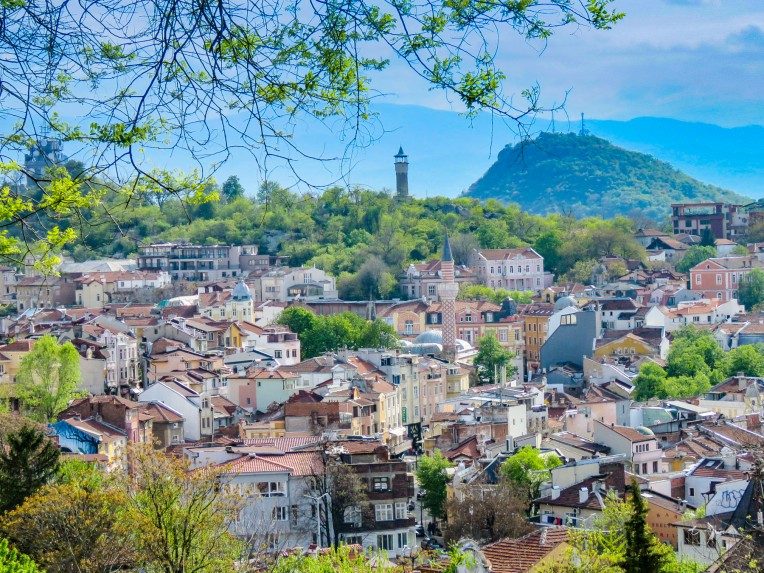 At just over a mile long the pedestrian mall in the center of Plovdiv is the longest in Europe, running from the Stefan Stambolov Square along Knyaz Alexander I, and Rayko Daskalov Street before ending at the footbridge lined with shopping stalls that crosses the Maritza River.

History erupted along its length, and at times, it felt as if we were traveling back through antiquity.  At the south end of the mall near the Garden of Tsar Simeon park the ruins of a Roman Forum and Odeon from the second century CE can be observed.  Discovered in 1988, its been determined that this central shopping and administrative area of ancient Plovdiv covered a vast twenty acres. 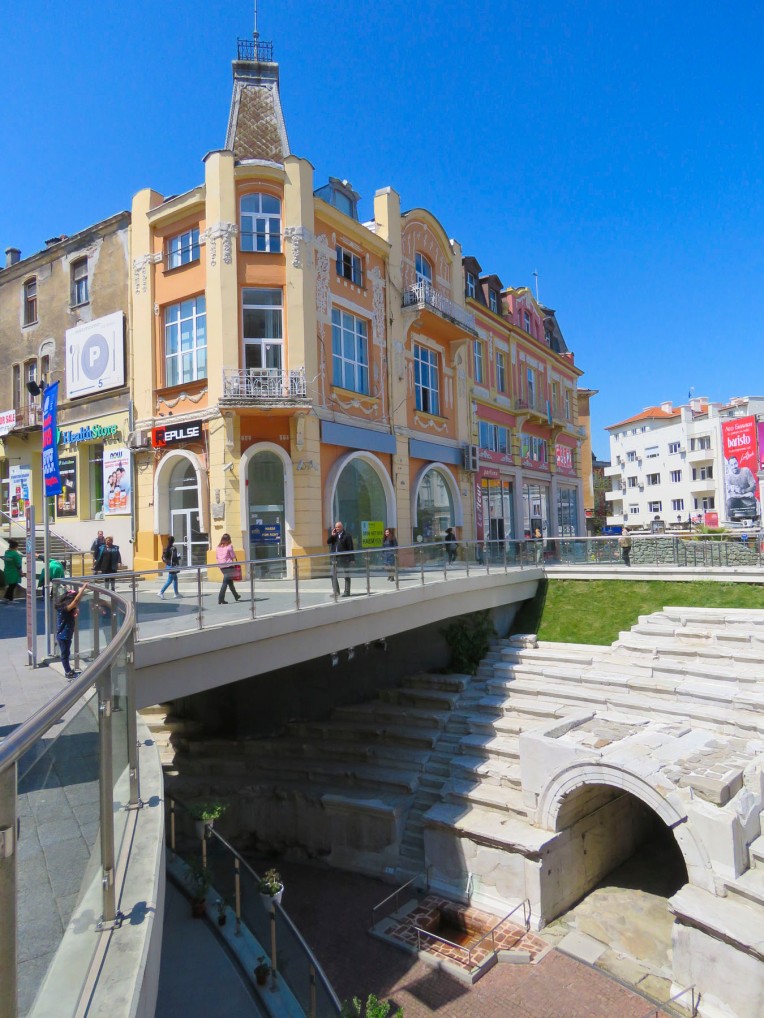 But the jewel of the mall area was the curved ruins of the Ancient Stadium of Philipopolis, with its fourteen tier seating area, unearthed in 1923. Situated below street level and surrounded by modern buildings at Dzhumaya Square, the ruins provided a dramatic juxtaposition of the ancient and contemporary, where you can actually see the layering of history and how the city was built over earlier civilizations.  From this excavated section, archeologists have determined that the stadium was a huge 790 feet long and 165 feet wide and could seat nearly 30,000 spectators. 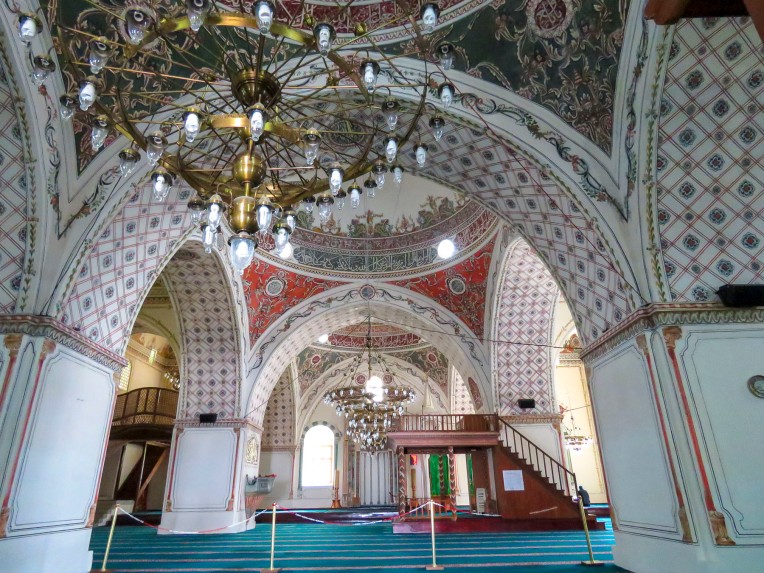 Across the square the Dzhumaya Mosque is the main Friday Mosque for Muslims in Plovdiv.  Constructed in 1421, it replaced an earlier mosque built in 1363 on the foundations of a Bulgarian Church destroyed during the Ottoman conquest.  It is one of the oldest and largest Muslim religious buildings in the Balkans. At the café in front of it we enjoyed some sweet Turkish tea and pastries in the warm afternoon sun. 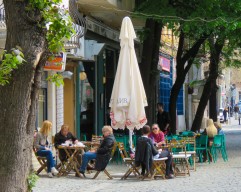 Veering off Rayko Daskalov Street we wandered through the Kapana Creative District.  The area had fallen on hard times and was almost demolished to become a modern trade zone before local architects and historians lobbied to protect its Bulgarian Revival architecture.  Now it’s a destination “go to place.”  The whole neighborhood has been pedestrianized with cafes, hip shops, artist galleries, wine bars, craft beer brewers and small restaurants now filling once vacant storefronts. 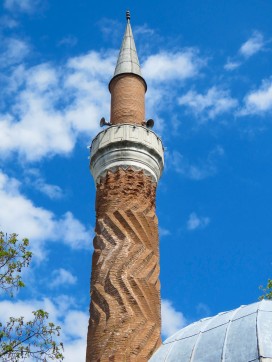 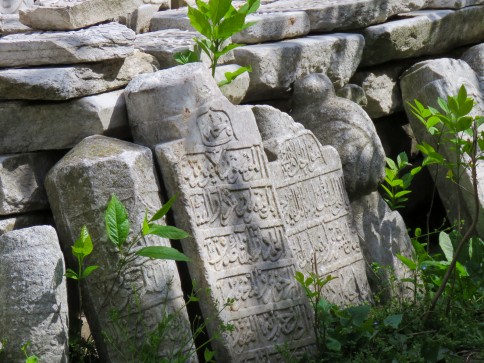 The distinctive twisted minaret of the Imaret Mosque towered above the treelined streets on the north side of the Kapana  District as we wandered back to the pedestrian mall and the Maritza River. The unplastered, red brick building and minaret were constructed in 1444 during the Ottoman reign.  Many fine gravestones with Islamic inscriptions were scattered around the yard which once served as a Muslim cemetery. 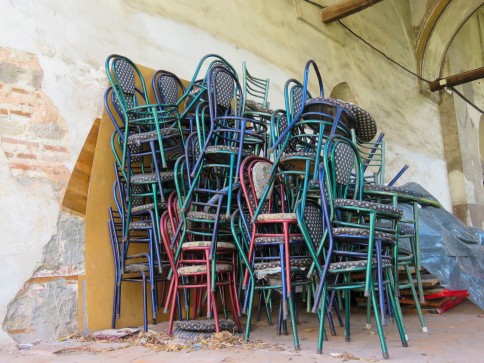 Under the peaked arches of the mosque’s portico hundreds of chairs were stacked high, waiting to be used for a future event.  The mosque took its name Imaret from the Turkish word used for soup kitchens. For four hundred years, every day hot meals and bread were handed out there for the poor people, regardless of their faith. 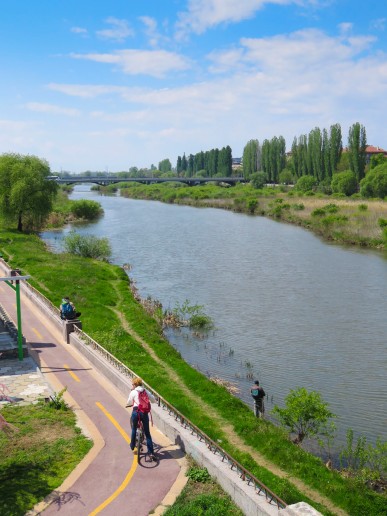 The pedestrian only shopping bridge over the Maritsa River will take you to the Karshiaka district, a newer neighborhood on the northern bank of the river.  The bridge itself was disappointing, being a totally enclosed, elevated tunnel with no views of the river, but the bike path along the riverfront offered a nice shady stroll along the water’s edge. 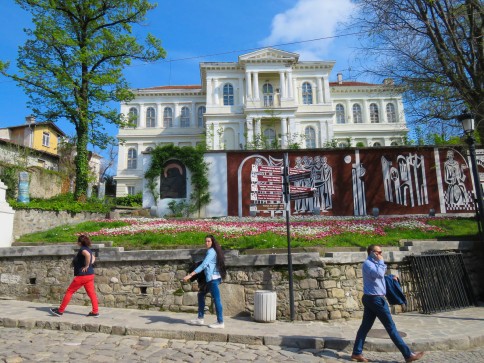 Heading back to our hotel we took our host’s advice and stopped to sample wines at his friend’s shop called Vino Culture.  It’s an intimate gastropub and wine bar with a knowledgeable staff dedicated to promoting small Bulgarian wineries from different regions of the country.  Since we like red wine, Boris, our viniculture expert for the evening, suggested we try a wine made with the Mavrud grape.  It’s an ancient grape that has been cultivated in Bulgaria thousands of years.  Late ripening with a thick and almost black colored skin, the grape produces a strong, full of character wine that is a deep ruby shade.  We loved it.

Tomorrow we look for a UFO.  Really – that’s not the wine talking.