It was late in the afternoon when we drove across the Ponte de Santa Clara into Coimbra with the reflection of the old city brightly shining on the water of the Mondego River below.  A wonderful sense of anticipation built as we crossed the bridge, seeing layers of history climb from the riverbank to the crest of this ancient city.  Unlike Lisbon or Porto where you are suddenly there, here we glimpsed how history progressed. Crossing the river and entering the city after a long journey, there was a sense of arrival.  We were traveling back in time.  Fortunately, today there new conveniences and we ditched our car in the underground parking at our hotel, Tivoli Coimbra.  It’s a nice, reasonably priced, business class hotel only a short walk from the historic district.

Coimbra is a city for walkers.  Ancient lanes crisscross the historic district, weaving their way steeply up the hillside until you eventually reach the University of Coimbra, which crowns this charming city.  But the journey there is so rewarding, with arched alleys, cathedrals and numerous shops and restaurants all vying for exploration.

Every day is a good day in Portugal when it starts with café and a Portuguese pastry.  We started ours next to Igreja de Santa Cruz at, of course, Café Santa Cruz.  This pleasant cafe is in an old parish church that dates to 1530. After its desecration, the space was used as a funeral home, fire station, hardware and plumbing store before becoming a café in 1923 and the beloved Coimbra institution it is today.  Outside, as we left, street musicians were just beginning to tune up as we entered the cathedral and its monastery next door.

Coimbra was the capital of Portugal when construction of Igreja de Santa Cruz was started in 1136.  The importance of the cathedral and monastery in Portugal’s early years was such that the first kings of the country, Afonso Henriques (the conquerer, 1109-1185) and his heir to the throne Sancho I (the populator, 1154-1211) were entombed on opposite sides of the altar.  Usually the altar is off-limits in churches, but here we were able to closely examine the tombs and inspect their intricately carved features.

Deceptively, many of the marble columns and surrounds of the altar are actually wood, painted to imitate marble.  The cathedral aged poorly in its early centuries as the result of repeated Spring flooding from the Mondego River.  In the 1700s Azulejos tiles were added to the walls to cover severely water-damaged early fresco paintings.  A spectacular and huge four thousand pipe organ hangs precariously from the wall of the sanctuary.  Apparently, it’s so difficult to play only three people know how.  The monastery is huge with many interesting rooms and intriguing details to explore.

Outside the wide pedestrian-only avenue Praca 8 de Maio runs flatly through the historic district.  It will change its name to Rua Visc. Da Luz and eventually Rua Ferreirra Borges before ending near the river.  Eateries with outside dining, shops and street performers line this mall, which is Coimbra’s equivalent to New York’s Fifth Avenue, with a little bit of Canal Street thrown in.  It’s the place to walk, to see and be seen.  In the evenings fado, rock and jazz bars enliven the strip. Many small alleys veer off this main street to zigzag their way uphill through ancient, arched city gates to old neighborhoods. 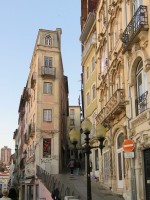 We passed folks calling down to their neighbors from above and others using a rope and bucket to lift groceries up to their fourth or fifth floor apartments.  Groups of jovial students in their traditional capa e batina, black capes, rushed by on the way to or from their Republics (small frat houses) before we reached the prestigious University of Coimbra that crowns the city, occupying what was once an old medieval palace. 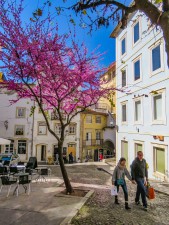 Dom João III brought the university here in 1537, after the institution spent its first two-hundred fifty years in Lisbon.  The school is one of the oldest universities in Europe.  While Dom João III’s statue centers the courtyard around which the university is built, the grand façade of the Via Latina with twin staircase and bell tower anchors the square.

Next to it, inside Sala dos Exames, the walls and ceilings of the lecture halls and dissertation exam rooms are ornately decorated to the point of distraction! The hallways were lined with beautiful Azulejo tiles.  The extravagance continued in Chapel of São Miguel with gold leaf and a majestic organ that nearly takes up the entire space. 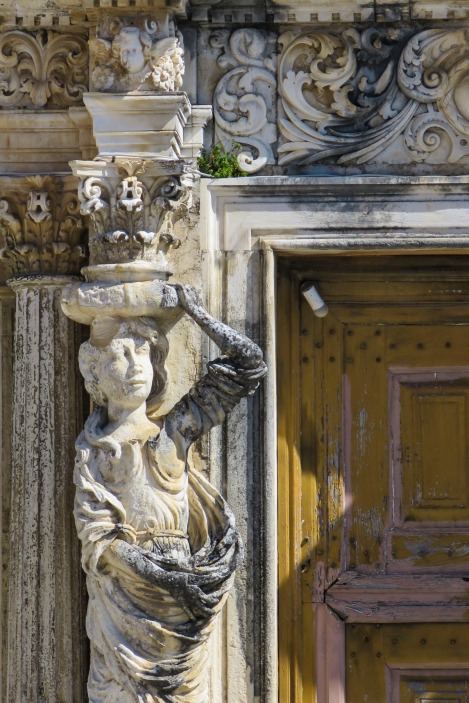 The highlight of our visit to the university was our ten minutes in the Biblioteca Joanina.  That’s all the time they allowed, and my wife swears they encouraged us to hold our breaths for the duration of it so as not to introduce excessive humidity to the climate-controlled environment. 200,000 ancient texts are kept in three, two-storied rooms, richly decorated with exotic woods, muraled ceilings and gilded carvings.  In the evenings, after closing, the reading credenzas are covered with sheets of leather to shield them from bat droppings.   A colony of bats is used to protect the books from insect destruction.  The bat guano is swept away in the mornings.  Under the library is the Prisão Académica, academic prison.  It was allegedly used for bad fado singers, plagiarists, late book offenders and dueling academics.

From the university we followed the twenty-one arches of Aqueduct of San Sebastian – Garden Arches, constructed in the late 1500s on the ruins of an old roman aqueduct that dated to the first century, along Barrio Sousa Pinto to Jardim Botânico da Universidade de Coimbra.

Constructed in 1772, this wonderful thirty-two acre park covers the slope under the university.  The upper third of the botanical garden features terraced, formal gardens with fountains, a large conservatory with a waterfall and stream running through it, and a medicinal plant garden.  The remainder is now wild, old growth woodland that was originally populated with exotic specimen trees collected from different regions of the world.  The park is very popular spot to have wedding photos taken. 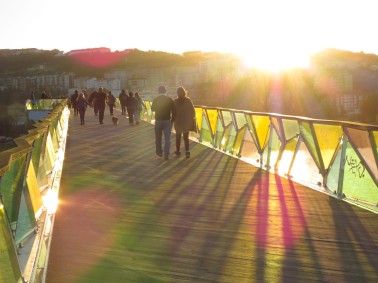 Coimbra does outdoor spaces very well. We ended our day strolling along the riverbanks in Park Verde do Mondego, which was full of families seeking open spaces, before crossing the colorful Pedro e Inês footbridge.  The sides of the bridge are colored glass panels that shine like a rainbow, creating a very dramatic effect.  Below us rowers in scull boats cut through the mirror surface of the water, distorting the reflection of the city in their ripples. 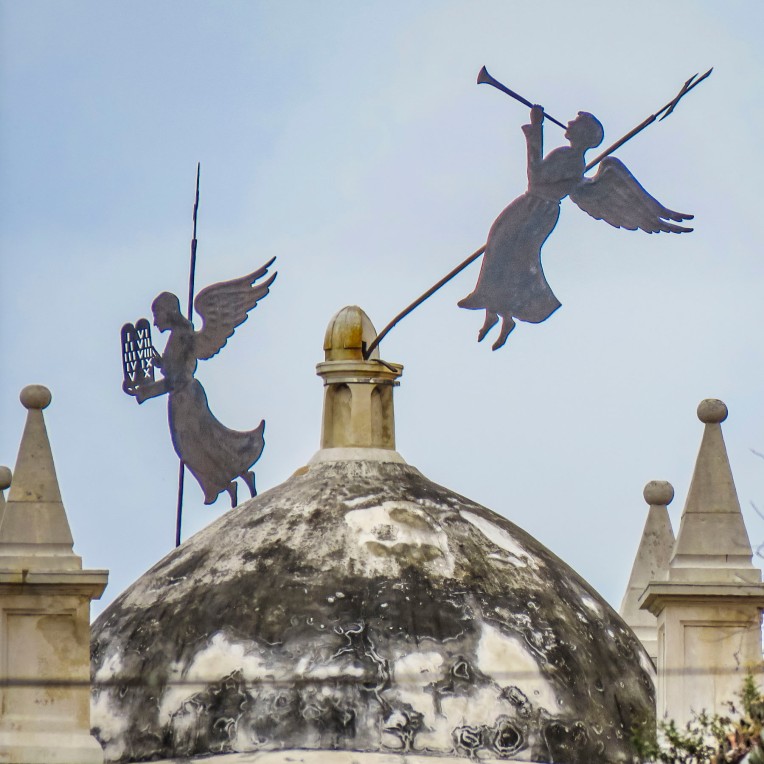 The next morning as we looked for a café at which to have breakfast, we walked along Rua Olimpio Nicolau Rui Fernandes past Jardim da Manga, which was once part of the Santa Cruz Monastery next to it. A unique renaissance structure with Moorish water garden influence, it has a large, open-sided cupola at its center, surrounded by four small chapels, set above large garden ponds.  King John III of Portugal is said to have designed the structure on the sleeve (manga) of his jerkin when he visited the monastery in 1528, and thus it was built.

Further along Jardim da Avenida Sá da Bandeira divides the boulevard into a lovely, treelined public space that runs for several long blocks through a neighborhood, before it ends just shy of Jardim da Sereia (mermaid.)  The older buildings edging the park are full of character with interesting architectural details. The area was reminiscent of Paris. 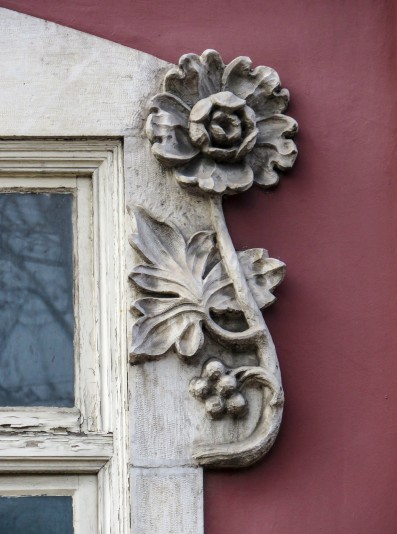 Three statues representing faith, hope, and charity top a ceremonial arch flanked by twin gatehouses and greeted us at the main entrance on Praca Republica; they perfectly framed the ornate manmade waterfall fountain at the end of a long promenade.

Azulejo tile murals edged with religious statues framed the sculpted fountain.  At the top of the fountain water gurgled from under a statue of the Virgin Mary, symbolically giving life to the waterfall.  Symmetrical stairways on either side led deeper into the heavily shaded park.

Reluctantly we ended our wanderings in Coimbra and headed to Porto.

We, like other visitors, didn’t budget enough time to fully explore Coimbra as it is viewed as only a short stop between Lisbon and Porto.  This ancient city needs at least two full days to enjoy its charms and a third if you want to explore the surrounding countryside and nearby Schist villages.