Time has passed so quickly, with our days full of adventure and exploring, and it is difficult to believe we’ve been away from home for one hundred days already.  The month of July was spent driving down the East Coast of the US, visiting friends and family and having a great time. Our first three weeks in Ecuador were packed with activity.  Quito, the Galapagos Islands and driving south to Cuenca along the Pan-American Highway, also known as the Avenue of the Volcanoes, filled our itinerary. 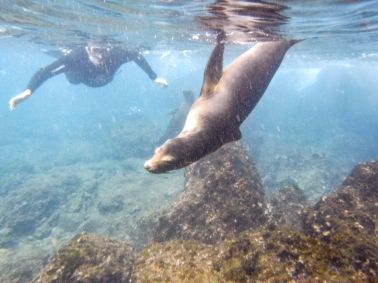 Arriving in Cuenca, we set up home for five weeks in a lovely studio apartment, for under $500 per month, that had a large rooftop deck with tremendous views over the Rio Tomebamba. We immersed ourselves in the neighborhood; it was a delight to shop in the city’s central market for exotic fruits, (pitacaya is our favorite,) from the Amazon region, plentiful and pricey, or for locally grown vegetables which were so inexpensive.  Every city block seemed to have multiple panaderias, bakeries, that offered extremely inexpensive and delicous baked goods. A dozen roses usually cost four dollars. Alternately, a large, American style supermarket had prices that rivaled those around our old home in Pennsylvania.  Cuenca was full of the ubiquitous yellow taxis.  For under two dollars we could travel to the far reaches of this sprawling city.

Adapting to our surroundings in a new country, we noticed that the sun sets quickly here with practically no twilight period. We are also adjusting to the concept of long-term travel and retirement itself – what our expectations should be on a daily basis.  24/7 together is a new concept for a previously working couple. We have often asked each other which day of the week it is.  Every day does not need to be nor can it be an adventure.  We enjoyed chilling on the rooftop, reading and writing.  Alternately, we wandered through different parts of the city taking advantage of the many free public museums scattered about. 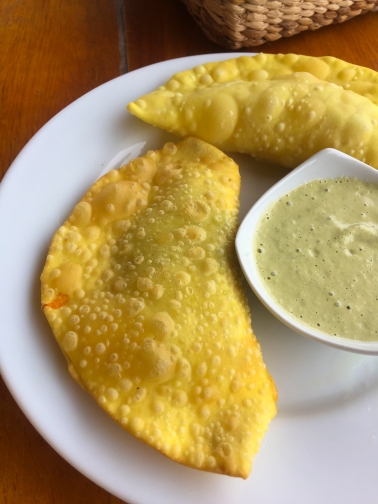 The dining out options in Cuenca covered the full spectrum from mom and pop holes-in-the-wall offering the plate of the day, plata del dia, where for $3.50 you received a very good three course lunch, to fine gourmet dining that reasonably ran about $50.00 for two with wine, dessert and coffee in a beautiful restaurant.

One of our favorite snacks was Tortilla de Choclo, eighty cents, a corn pancake that was grilled on a large ceramic plate, curbside, as you waited.  Often, coffee and dessert cost more than lunch itself.

There were some difficulties with our new environment.  Mainly we had trouble acclimating to Cuenca’s 8,500ft altitude.  This was surprising because we spent the better part of two weeks driving through the Andes Mountain Range at heights exceeding 10,000ft and surely thought Cuenca’s setting would be easier on us.  Donna required a visit to the emergency room of a local private hospital one Sunday morning after feeling dizzy for too long.  After checking that her vitals were okay the doctor wrote a prescription for Dramamine to treat the effects of altitude sickness.  A week’s supply of the drug cost $2.40. Our forty-five minutes in the emergency room cost thirty-two dollars. 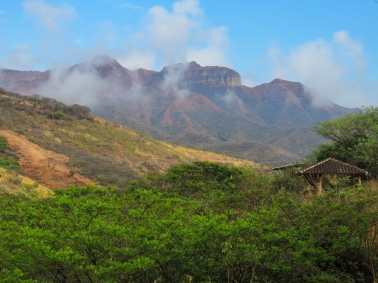 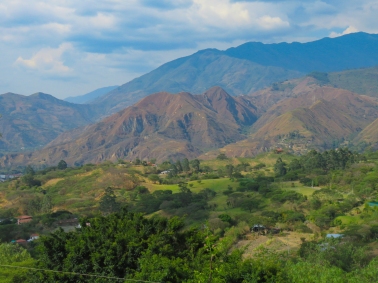 A long weekend, a vacation from our vacation, took us to Vilcabamba, a small town in Ecuador’s southern Andes.  A reputation as “the valley of longevity,” with mineral rich mountain water and crisp air, has attracted a diverse international expat population of aging hippies.  It was ten degrees warmer there, which was a nice reprieve from the chilly days and nights in Cuenca.  At Hosteria Izhcayluma, a wonderful and very affordable eco-lodge/spa, we indulged in deep tissue massages that lasted for ninety minutes and cost all of $24.00 each.  Feeling adventurous I chose to go on what I thought would be a leisurely five-hour horseback ride through the surrounding mountains.  The brochure advertised “gallop with our horses.” Thinking this was hyperbole I signed on.  From the moment we all mounted our horses we galloped out of the stables, through Vilcabamba, into the mountains and back.  I walked liked a saddle-sore cowboy for a week after that. 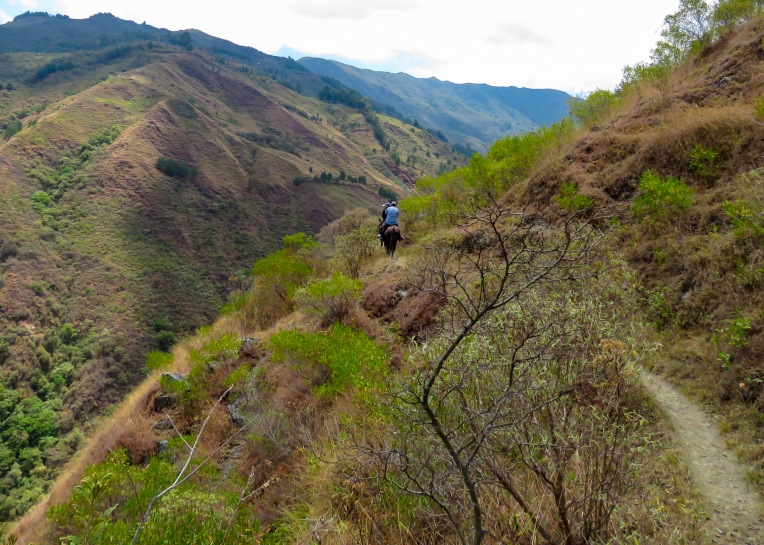 One of the reasons we chose Cuenca for our first short term rental was so that I could take advantage of their dental tourism offerings. I had put off getting things done in the states because of what I thought were excessive cost, even with insurance.  I am extremely pleased with the dental care that I received at Finding Health in Ecuador. Tooth extraction – $35.00, cavity – $25.00, two-tooth bridge – $250.00.  Our premise that we could live abroad more economically than living back in the states is so far holding true. 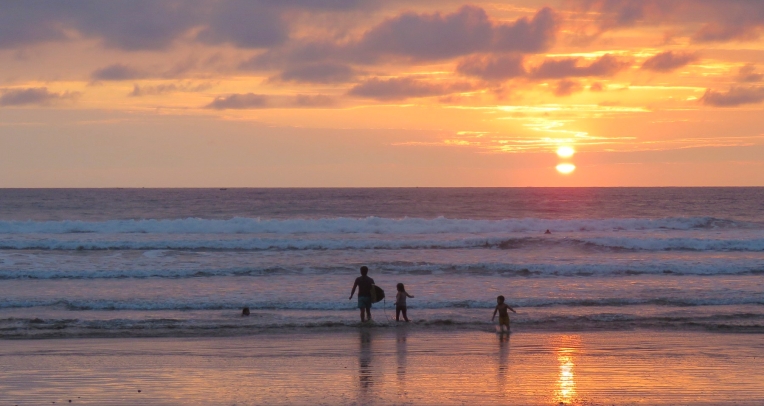 Currently we are in Olon, a rustic beach town on Ecuador’s southern Pacific coast with a wide, flat sandy beach that stretches for nearly five miles without a high-rise to been seen. It’s off season, mostly cloudy, but the water is still warm, perfect conditions for the handful of surfers and us.  Fishermen still launch skiffs through the surf from the beach, and fathers can be seen taking their kids to school on the handlebars of their motorcycles, gently splashing through the incoming tide.  Our rent for the month of October is $730.00 with breakfast included!

By ten o’clock each evening the streets are empty.  From our apartment at night we can hear the waves crashing onto the beach, along with roosters crowing – they start at one in the morning, seemingly on a campaign to discourage tourism – and dogs barking to each other. There is no traffic in this tiny four block square village.  Everyone walks in the middle of the road, roosters, dogs and cats included.  Every day pushcart vendors wheel their offerings of fruit, eggs, cheese, clothing, kitchen supplies, etc. through town, each peddler singing out a different sales pitch. 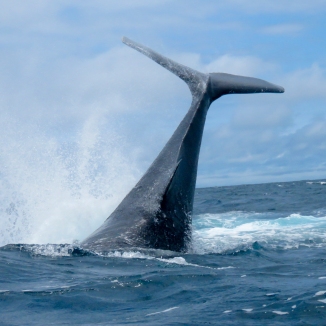 For a change of scenery, we took a day cruise out of Puerto Lopez to Isla de la Plata, an uninhabited island which is part of Machalilla National Park.  It is also referred to as the “budget Galapagos.”  Fifty dollars per person included shuttle transportation, boat ride, snorkeling gear, lunch, a three-hour hike with a licensed guide to view nesting birds and most importantly the chance to see humpback whales. 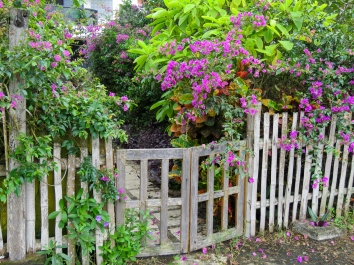 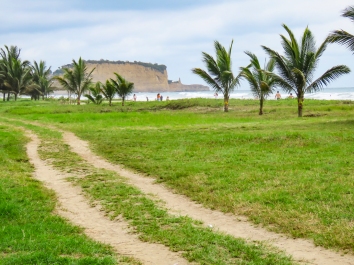 At the outdoor fish market, two kilos of fresh large shrimp set us back six dollars.  Several doors down at a little house with the barbeque out front, two plates of fresh grilled fish with a beer cost five dollars for dinner.  For a tiny place, this village has a surprising number of eateries, most of them created by northern European surfers who fell in love with the waves here and never left. Cotinga’s might be the only restaurant in Ecuador where you can get home-made borscht, prepared by Olga a Russian expat.

The only thing Olon really needs is a French inspired chef whose specialty is Coq au Vin.  Roosters, you’ve been warned!