The road conditions don’t warrant driving after dark, there are just to many ifs, so we departed early from Hostal Taita Cristobal, after wishing our table mates safe travels and adventures as they hoisted heavy backpacks to their shoulders. The Quilotoa Crater and Baños, the adventure capital of Ecuador, were our day’s destinations.  Really, Donna’s not going to go zip lining nor am I willing to try bungie jumping.  Still, we thought we could find an adventurous activity where one foot was required to be in contact with the ground occasionally. Experience has taught us to double the amount of time our GPS app suggests it will take to get from point A to B due to road conditions and the frequent stops for photo opps. As my wife says “if we continue to stop every 100 yard for pictures, we’ll never get there.”   The return drive back to the main road in Sigchos seemed to go very quickly.  We only stopped for photos around every other bend. Fortunately we were able to drive down the center of the road or hug the left side to avoid looking over the precipice most of the time. It was nerve racking when we had to get closer to the edge to make room for an oncoming truck to pass. We never thought the sight of a guardrail would bring as much joy as it did when we got back on the main road in Sigchos.  As our host had promised the road out of Sigchos was freshly paved. Along with a bright, yellow double line down the center it had shiny, heavenly guardrails around every curve!  Even with the new road there were still hazards.  There were numerous signs for falling rock or mudslide zones. We also shared it with folks herding sheep or cattle, donkeys carrying water barrels and folks selling things from motorcycles towing small trailers.  Suddenly around one curve, marked by only 2 piles of dirt as a warning, about one hundred feet of road had collapsed into a steep ravine.  There were no flagmen, orange cones or repair crews in the vicinity.  The hair on the back of our necks stood up. 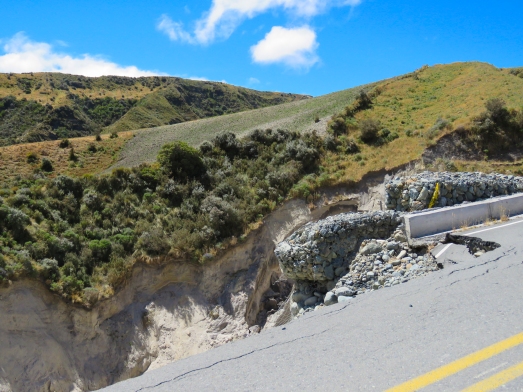 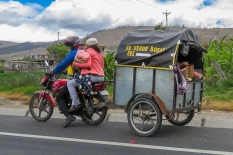 The treed landscape slowly disappeared and was replaced with barren windswept vistas as we rose in altitude, the closer we got to Quilotoa. Gale force winds ripped around us on the ridge above the magnificant Quilotoa Crater (12,913ft), its turquoise waters calm a thousand feet below.  Local legend believes Quilotoa fell in love with the Cotopaxi volcano, and  the tears from her unrequited love filled the crater.  Teary-eyed from the wind chill and altitude, we sought out some restorative coca tea. 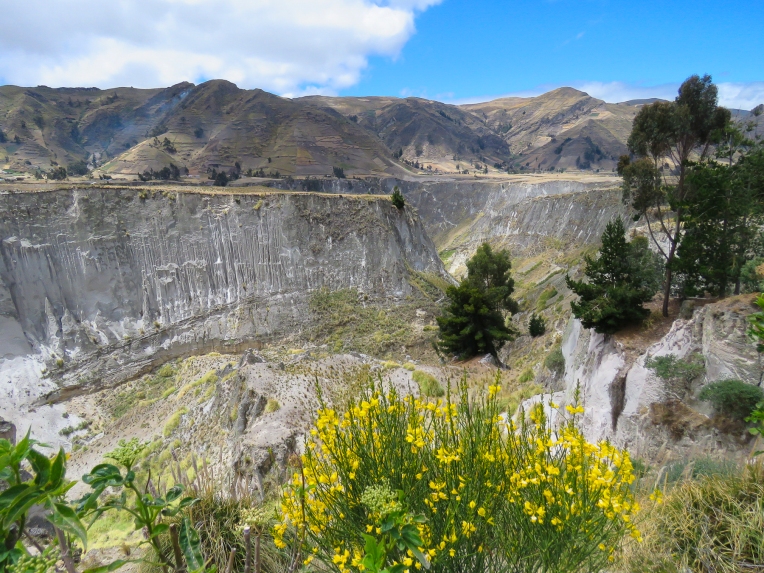 A few miles down the road Canyon del Rio Toachi, a mini Grand Canyon, offered interesting photo opportunities from the parking area.  Further on small groups of men and women could be seen in the fields winnowing grain by throwing it into the air to separate the wheat from the chaff. Barns made from thatch lined the road for storage.In Zumbahua, with the hills green again, we picked up route E30, which connects the Pacific Coast region with the Amazon basin through Baños.  It is a slow cross country route that encounters numerous traffic lights as it passes through many towns along the way, but gives wonderful insight into how folks live along this corridor of commerce.  Shops of every variety lined both sides of the road with their doors and workshops literally on curb of the road. 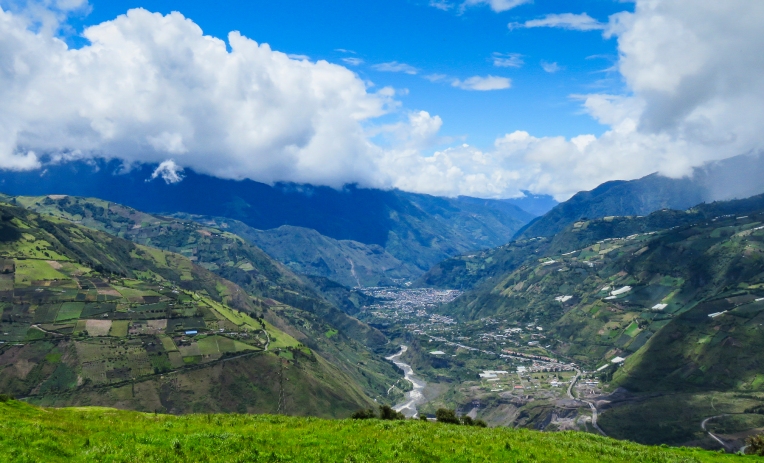 Baños is a well developed town of about 40 blocks that is know for its location under the towering, 16,575ft high and still active Volcan Tungurahua.  As recently as two years ago, the town had to be evacuated due to an eruption.  Mineral rich hot-springs, numerous waterfalls and the close proximity to the Amazon basin made this a must stop for two days. 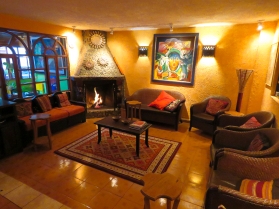 The sight of a tall waterfall pouring down from a ridge above town greeted us a we turned down the street for Hostal Posada de Arte.  This small boutique hotel was as whimsical as its name suggests, with a colorful interior and excellent, locally created art decorating the walls.  If the wind blew just right, mist from the waterfall fell on the inn.  Breakfast and dinner at the hotel were delightful with a large fireplace warming the room.

On the central plaza several blocks away stood the Church of our Lady of Holy Water which has many large paintings depicting miracles granted by the Virgin Mary.  Most illustrate some mishaps centuries ago with the turbulent Rio Pastaza which rushes through town.

Clouds hung below the mountain peaks as we hiked down to the El Pailon del Diablo, the Devil’s Waterfall. This met our criteria for keeping our feet on the ground.  It was an amazing descent along a cloud forest trail to a thundering waterfall. We weren’t planning on getting wet here, drenched is more like it; there is no way to avoid it, especially if you squirrel under the ledge to find the rabbit hole that leads to the highest viewing platform as we did!  And you haven’t experienced the fury of this cascade fully unless you do. There is a rest hut at the bottom of the trail, by the suspension bridge, with a fireplace where we relaxed and purchased some refreshments to energize ourselves before the trek back up. 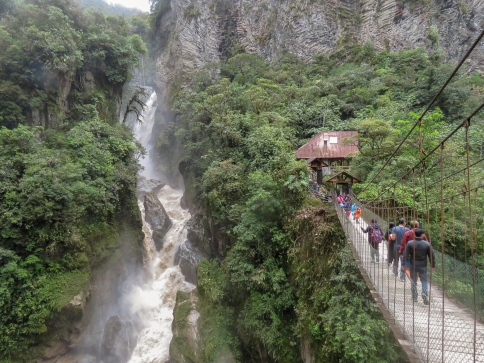 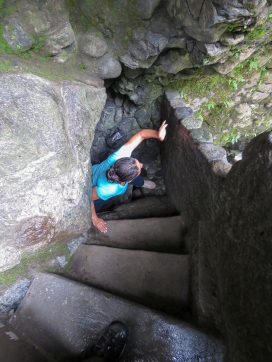 The hike back to the parking area wasn’t as difficult as we had worried, nevertheless our muscles ached. So being in the land of holistic cures we tried a locally brewed craft beer by (no kidding) Shaman breweries.  It was so delicous, one of the best brews ever.  Sadly, we haven’t been able to find it since.

The Swing at the End of the World was another matter. Hanging from a treehouse situated on the edge of a ravine, with Volcan Tungurahua rising dramatically to the sky across the way, you can get a thrilling swing or a swing with a twist as many times as you dare.  Cost of entry for the day – $1.00. Brave soul, Donna got airborne! 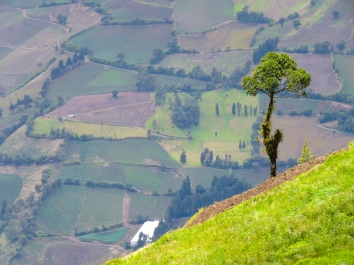 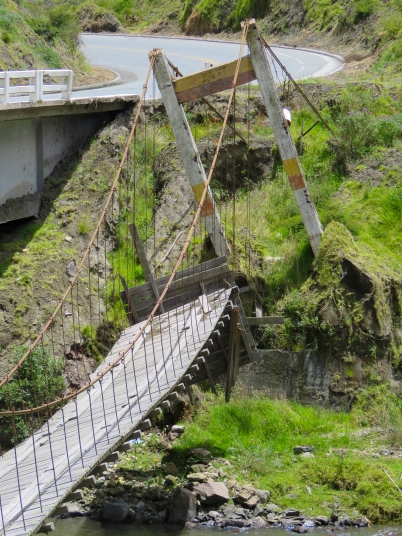 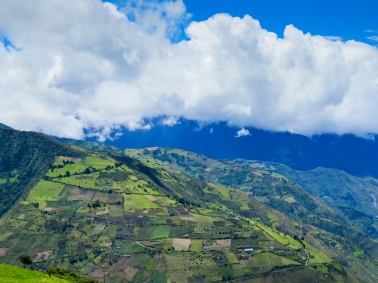 We took the first left out of Baños onto Rt. 490, the slow road, heading south to Riobamba.  Fortunately, the weather was with us as we began to climb out of the valley, rewarding us with tremendous views of Baños in the valley below and Volcan Tungurahua to the east. The route passed through many small villages and verdant farmland as it sinuously followed the Rio Pastaza which snaked through the valley several hundred feet below us.  With such steep terrain we were always amazed that every acre seemed to be cultivated by manual labor. Constantly battling the whims of nature, a hard living is extracted from the earth here. Mother nature rules in these mountains, as witnessed by the path of older, washed away bridges we viewed.

The majestic Volcan Chimborazo came into view for the first time as we crested a small hill on the outskirts of Riobamba.  At 20,549ft it is the tallest mountain in Ecuador and the highest near the equator.  As the crow flies the mountain was only 15 miles away, but as the road curved it took us another two and a half hours to get to our night’s lodging at Hosteria La Andaluza in San Andres, which was very near the mountain on Rt. 35, the Pan-American Highway.  The mountain was hidden by afternoon clouds by the time we pulled into the hacienda’s driveway. 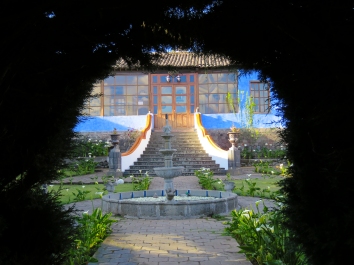 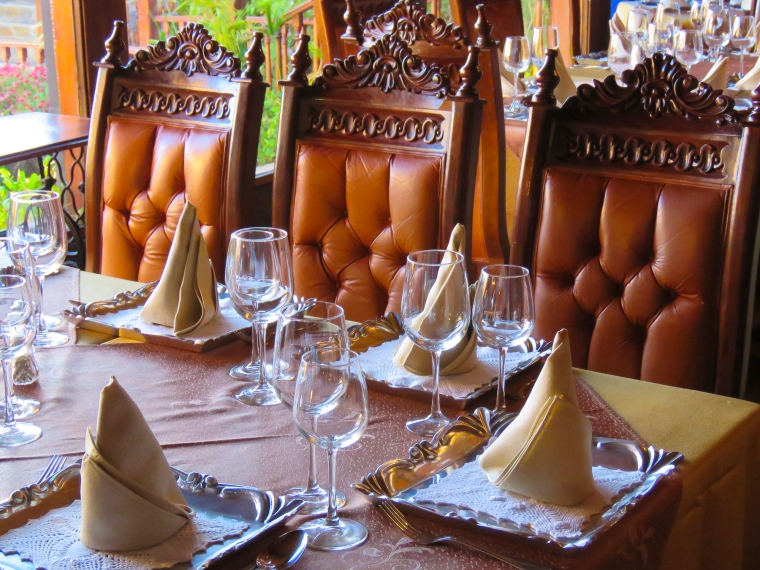 Seeing two exhausted travelers approaching, the staff came from behind the reception desk to take our bags and welcome us.  A woodstove in the corner warmed pots of their high altitude tea remedy Canelazo, a mixture of local herbs and fruit which also could be consumed with an optional splash of a sugarcane moonshine.  It definitely warmed our bones.  Red rose petals on the bed sheets greeted us as we opened the door to our guestroom.  The functioning radiator was a nice surprise. This was the first hotel in Ecuador that we stayed in that offered heat; normally it’s window open, window closed, blankets on or off or light the fireplace. Our room overlooked a fountain filled with rose petals and freshly ploughed fields in the distance. 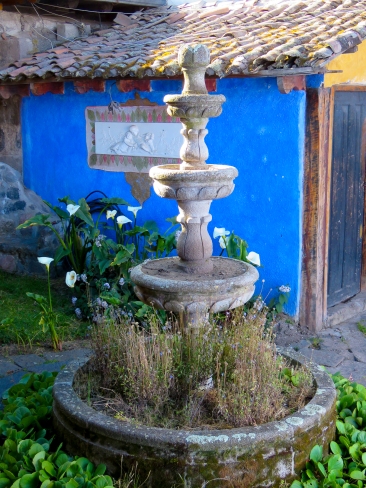 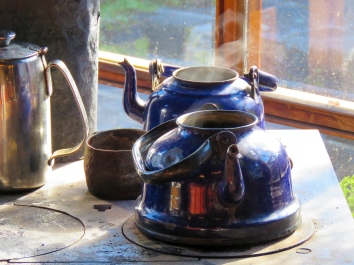 The hacienda dates from 1555 and echoes with history, “Simon Bolivar slept here,” had a familiar ring to it.  Ornate, antique furnishings highlighting the craftsmanship of an earlier era filled the common areas.  As we wandered about the grounds we were delighted to discover one courtyard  had a family of domestic rabbits scurrying about it. A large basket of carrots was left off to the side, so guests could feed them.  Two peacocks also strutted about fanning their elegant feathers. That evening chandeliers and candlelit tables created a romantic setting as the filet mignon we ordered was threactically flambéed at our table.

Chimborazo gleamed brilliantly in the morning sun and filled the horizon across the road from the inn.  It seemed almost close enough to touch, but it was only an illusion.  To the north just a tiny wedge of Volcan Carihuairazo appeared in the distance. We spent a good part of the day driving through the surrounding farmlands trying to get as close as we could to these beautiful peaks.

On mountain overload, later that afternoon we headed into the historic heart of Riobamba just to get a feel for the city and a change of pace. We had a difficult time figuring out the on-street parking rules, but fortunately after circling several blocks we spotted a parking attendant who issued us a ticket to park for fifty cents. Parque Maldonado centers the historic district with a monument dedicated to Pedro Vicente Maldonado, a multi-disciplined Ecuadorian scientist known for his work with the French Geodesic Mission.  He also had responsibilities as Mayor of the City, Lieutenant Magistrate Governor of the Emerald Province, Horseman of the Golden Key and Gentleman of the Camera.  Obviously a renaissance man; we weren’t sure if the statue was tall enough.  Bordering the plaza, La Catedral de San Pedro’s baroque façade is all that remains of the original structure, one of Riobamba’s earliest, after a 1797 earthquake estimated at a 8.3 magnitude shook the region for three minutes and left thousands dead. 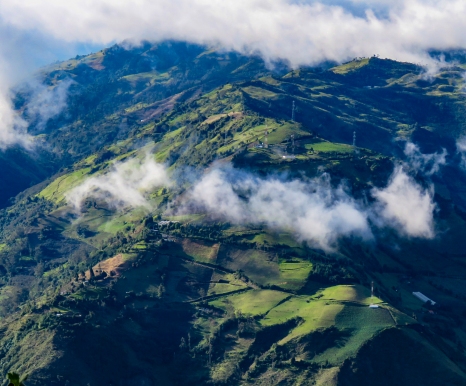 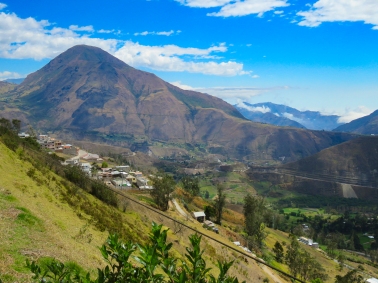 The next morning we left the wonderful hospitality of Hosteria La Andaluza for Cuenca, our final destination and home for the next five weeks.  Fields of quinoa hugged the steep slopes as we continued south on Rt. E35.  In one small village we passed parade floats and camionetas, shared pick-up truck taxis, filled with costumed revelers leaving town after what looked like a lively celebration.  If we had only arrived a little sooner.  These are the unexpected things you happen across when you travel the backroads.  Places and events that are too small to be included in the popular tour guides, but entertaining, interesting and eye-opening nevertheless.