We had spent a wonderful day cruising from Aveiro to Nazare, but now twilight was fast turning to darkness as we drove along an extremely narrow lane at the base of the formidable fortress wall that encircled Obidos.  We had arrived at our hotel Casa das Senhoras Rainhas according to our GPS, but we hadn’t.  We were on the outside of the walls, wondering like ancient invaders how to get in. 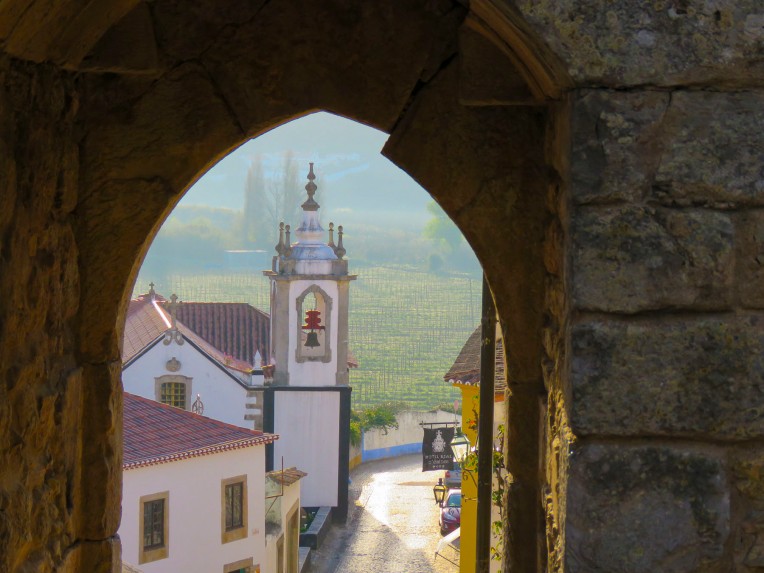 Admittingly Donna is the more accomplished linguist of the two of us.  I according to my loved one have been known to torture a language.  So, she eagerly sought advice from the only person we had passed.  From a short distance away, I watched the conversation unfold with the gentleman flailing his arms every which way for what seemed an inordinate amount of time. 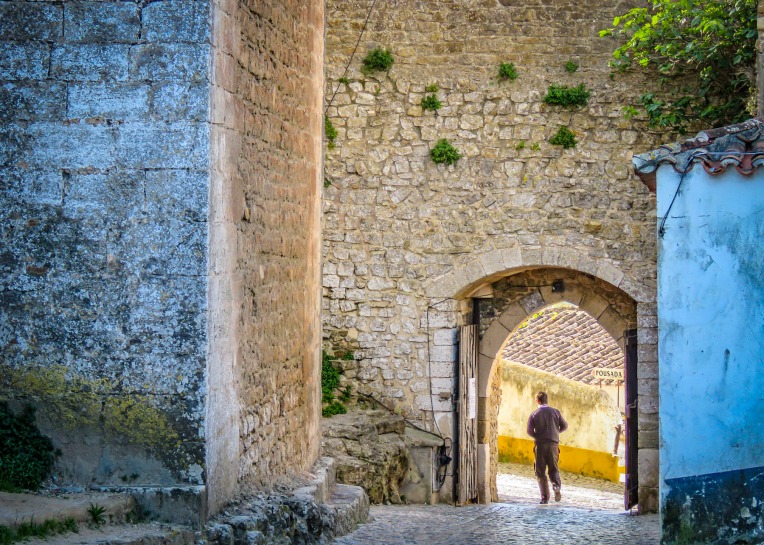 Smiling, Donna returned to the car.  “About the only thing I got from that was we should continue following the lane until the next hole in the wall. He was very insistent about that.” “Did he know the hotel?” I asked.  “Never heard of it, but I think he was intoxicated! My luck,” she laughed.  The lane narrowed even more as we drove forward.  Finally, there was an ancient portal, the size of a single door, through the wall that led to a short set of steps.  Abandoning our car for few minutes we climbed the stairs to an inner lane in search of our hotel.  After we finally found the place, the receptionist explained to continue driving along the wall until you reach an old city gate, enter there and follow the inner lane back to us and park anywhere you can.  OK, piece of cake now, we thought.

Inhabited since the 4th century BC by the Lusitanos, then the Romans and Visigoths, the city wasn’t fortified until the 8th century by the Moors.  Bent entrances, with a quick turn and an additional, heavy inner gate were used in many Arab fortifications.  In peacetime they were easy to navigate with pack animals, and during sieges provided a killing zone for the defenders of the city.  Remember, these bent gates were built long before cars were envisioned.  Obidos had two of them and tonight we had to navigate through one.  Porta do Vale ou Senhora da Graça was a drive through chapel dedicated to Our Lady of Grace.  In 1727 the old gate was renovated into an oratory chapel with sacristy, altarpiece, gallery, choir, and chancel by a local magistrate to commemorate his daughter’s death.   You actually transit through the nave to reach the interior street.  The gate was narrow, and it required a sharp k-turn just to line the car up to approach it correctly.  Donna was driving and I hopped out to judge just how much room we had around the car.  Driving up a slight slope on flagstones worn smooth from centuries of travelers, the tires spun with no traction as the car got halfway through the gate.  Backing-up and then gunning the car forward through the gate Donna only had the length of our Fiat 500 to turn sharply right and exit the inner gate.  It was do-able but nerve-wracking. 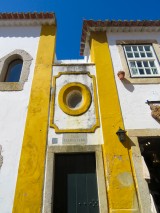 A few minutes later our bags were in our lovely room.  As in Aveiro “Parking Available” on the hotel website translated to driver be wary, or creativity needed to park.  We thought we had the perfect spot right in front of the hotel, but the receptionist insisted we were pinching the road too much and would be sorry.  Reversing down a narrow, dimly lit lane is never a good idea, so we thought a quick trip around the block was a better idea. I waved as Donna roared away into the darkness, gone.  Minutes passed, finally headlights gleamed off the flagstones.  “That was fun!” she grinned as she pulled the mirrors in and parked one side of the car as close to a building as possible, one block shy of our hotel.

With only two main lanes that ran the length of village, interconnected by a labyrinth of stairs and smaller alleys, Obidos was the perfect size, only slightly larger than Marvao, to explore for two days and relax before driving back to the airport in Lisbon for our flight to Sofia, Bulgaria.

The next morning, enjoying deserted lanes lined with flowering wisteria, calla lilies, and other interesting details we weaved our way to the Castelo de Óbidos  to enjoy views of the village and surrounding landscape from its strategic position.  This once formidable, medieval castle was transformed into Portugal’s first upscale, tourist pousada in 1953 and has been attracting discerning travelers ever since.  Whitewashed homes with brightly painted doors and window trim held up the ubiquitous red tiled roofs that appeared to fill the village below us. Mostly gentrified now, there are still a spackling of ancient dwellings waiting for TLC that give Obidos a wonderful character. 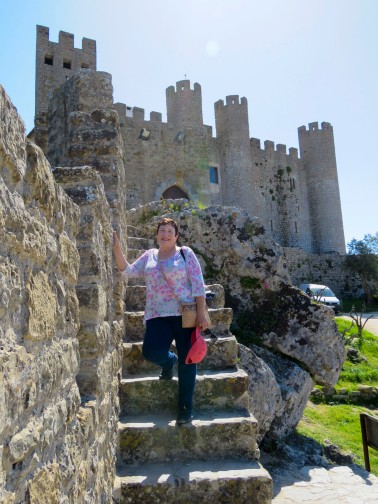 After scampering about on the ramparts for a while we headed back into the village.  The wonderful aroma of fresh baked bread drifted from Capinha d’Óbidos, as we walked along Rua Direita, and drew us right into a small storefront where the baker was grating lemon zest into a bowl of dough. She kneaded it and then put it aside to rise.  Behind her another baker slid fresh loaves of bread from a wood-fired brick oven to cool.  The breads and coffees here were divine! 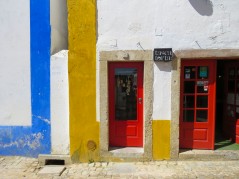 Continuing along we explored the few shops that were open this early in March and encountered one of the best street performers we’ve seen so far.  A woman posing as a statue in silver makeup, sitting atop a stone wall, daintily holding a silver umbrella as a sunshade, looked like a perfectly cast statue placed in an ideal setting.  Her performance was sublime.

We eventually made our way through the main gate of the walled city.  Porta da Vila de Óbidos is another bent entrance that did double duty as a chapel to Nossa Senhora da Piedade, the Virgin Mary, patron of the village.  Be sure to look up as you walk through, as Azulejos tiles from the 1700’s line the interior balcony.

Across the street we walked below remnants of a three-kilometer-long aqueduct built in the 16th century to supply water to the fortress. 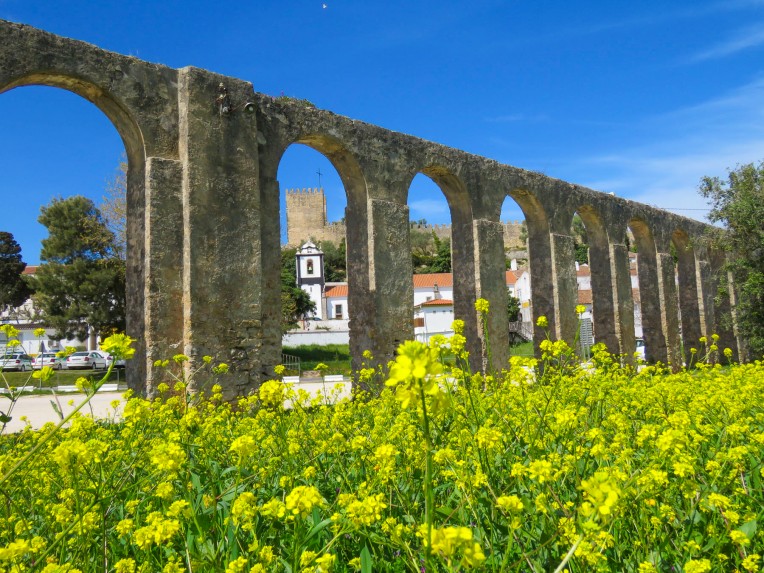 Dinner that night was a simple meal of bread, cheese and local sausages cooked uniquely on a ceramic hibachi, fueled with grappa, placed on our table at Bar Ibn Errik Rex.  As flames danced from our mini grill, the waiter would return to our table occasionally and turn the sausages to ensure their perfection.  It was an entertaining evening.  A few good Portuguese beers helped. 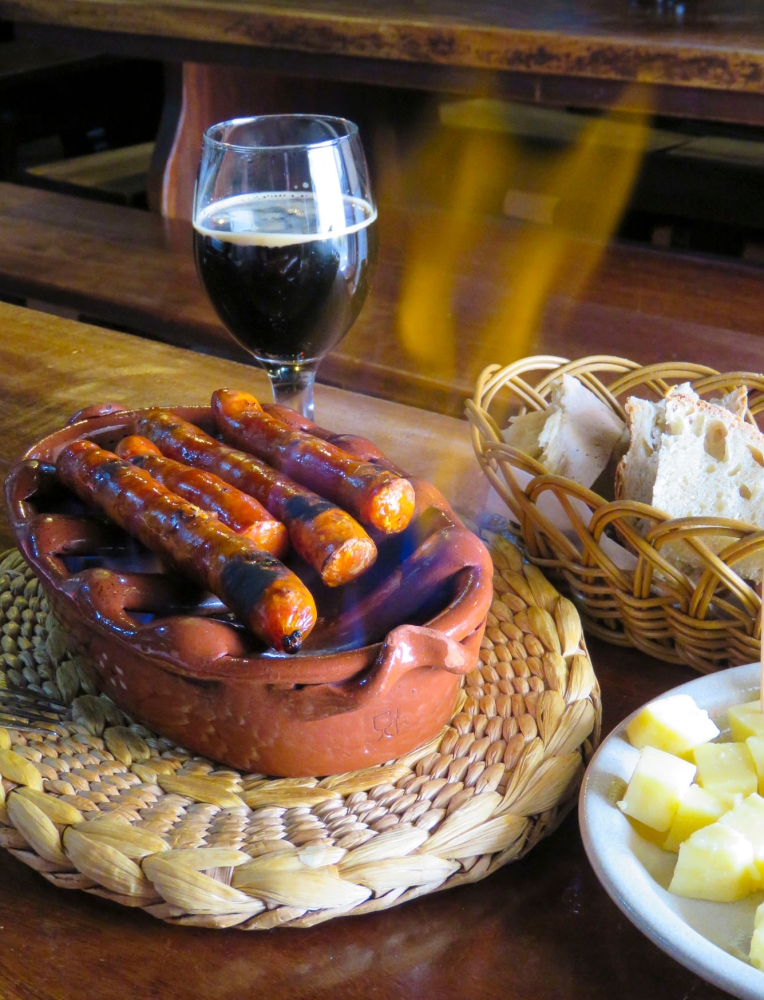 With our GPS App still set to avoid toll roads, we drove through the Porta da Vila de Óbidos and headed towards Lisbon, less than two hours away if we didn’t stop.  But, if you’ve been following our blog you’ll know that’s nearly impossible, there is always a quick glimpse of something that calls for a detour.

Torres Vedras with its aptly named citadel caught our eye.  With a historical time-line similar to Obidos, the hilltop in the old historic district was continually fortified against waves of early invaders.  Knowing a good piece of real estate when they saw it, the castle was seized during the Christian reconquest in 1148 and used by a succession of Portuguese Kings until it was heavily damaged in the catastrophic 1755 earthquake that hit central Portugal and Lisbon.  Built just after the reconquest, Igreja de Santa Maria do Castelo stands just below the castle walls.  The church’s bell cast in the 16th century continues to ring today. 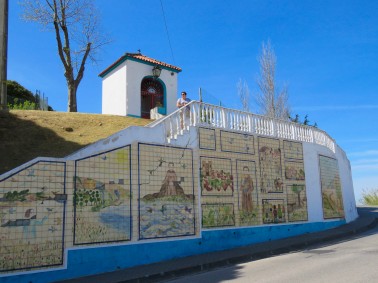 On a ridge above the city several ancient windmills sat amidst a new residential neighborhood.  It was an interesting vantage point from which to witness the new suburban sprawl radiating from the old historic district into the surrounding countryside.

Along the Sizandro River on the outskirts of town, an impressive two-kilometer stretch of a 16th century aqueduct with double arches still stands.  Driving under the aqueduct we followed the river south along the R374.  The high-density new developments around Torres Vedras quickly gave way to a landscape of vineyards and pastures.  Finding a restaurant for a late lunch, though, didn’t seem promising along this rural stretch of road, dotted with the occasional roadside café with a farm tractor parked out front, until we caught a quick peripheral glimpse of a larger establishment, across a small bridge, down a side lane.  It would take another mile before we could find a suitable place to perform a U-turn.  With nothing else around for miles Churrasqueira do Oeste is definitely a destination restaurant.  This rustic, family run restaurant with its friendly staff served a wonderful variety of fresh seafood and meat dishes at amazingly affordable prices.  (Having a restaurant do both well is not uncommon here, considering the close proximity of the ocean.) Mixed grilled seafood and grilled meats along with a good local wine, dessert and of course café sated our appetites.  It seemed fitting that we unexpectantly lucked upon this great find far off the beaten path on our last day.  Portugal was a fantastic country to explore.  We will miss it but hope to return in the future to breath its air and enjoy its wine again.