Our driver hurried to unload our bags to the sidewalk as the famous Tram 28 waited patiently behind us, its tracks blocked by our taxi.  That’s the way it’s done on Lisbon’s narrow streets. Never the sound of frustrated drivers impatiently honking their horns, just folks courteously understanding the limitations of their intriguing city, built before anyone dreamed of modern transportation. 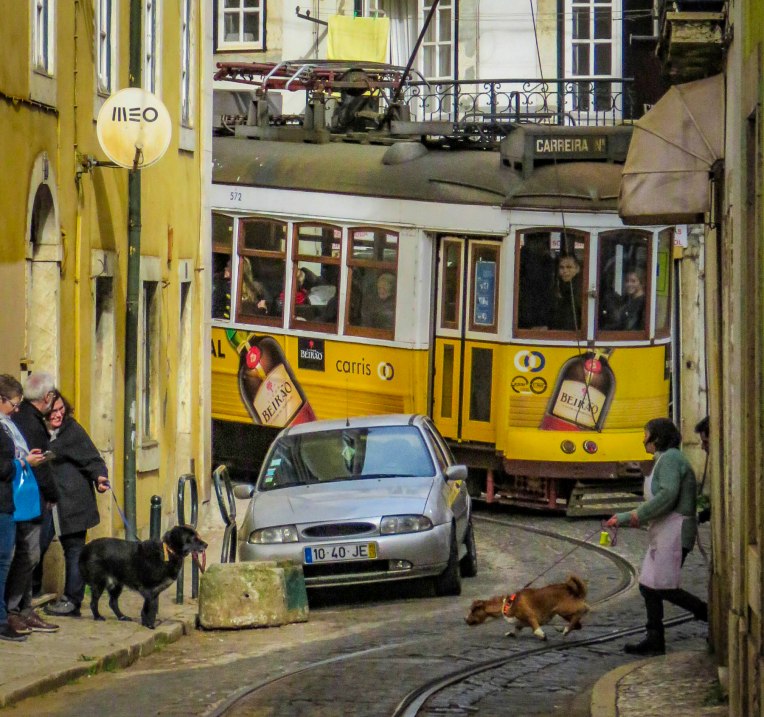 The winding alleys and stairways of Alfama still retain their ancient charm as they work their way steeply uphill from the bank of the Tagus River to the Castelo de Sao Jorge, the highest point in Lisbon. Spared the devastation of the 1755 earthquake and tsunami that destroyed the bulk of Lisbon, the meandering lanes and plazas of medieval Alfama haven’t changed in a thousand years. Alfama is the second oldest neighborhood in Europe, after one in Cadiz, Spain. Archeological excavations next to the Castelo de Sao Jorge have revealed evidence of a Phoenician settlement that dated to 1200 BC, a Roman amphitheater, and walls built by the Visigoths before the Moors arrived.  Today the rumbling sound of wheeled suitcases on the cobble stone alleys echoes, almost continuously, off these walls weathered by time. Tourists make their way to newly renovated Airbnb’s, as we did, much to the concern of older residents of Alfama who worry about being gentrified out of their homes.“This part of Alfama is restricted to residents’ cars only. Your street is just two blocks down that lane,” our driver said as he pointed across the tracks. We sighed in relief, as the street to our right was very steep and we weren’t sufficiently caffeinated yet to attempt an ascent, without sherpas, of what seemed liked the foothills of the Himalayas.

The winding alleys and stairways of Alfama still retain their ancient charm as they work their way steeply uphill from the bank of the Tagus River to the Castelo de Sao Jorge, the highest point in Lisbon. Spared the devastation of the 1755 earthquake and tsunami that destroyed the bulk of Lisbon, the meandering lanes and plazas of medieval Alfama haven’t changed in a thousand years. Alfama is the second oldest neighborhood in Europe, after one in Cadiz, Spain. 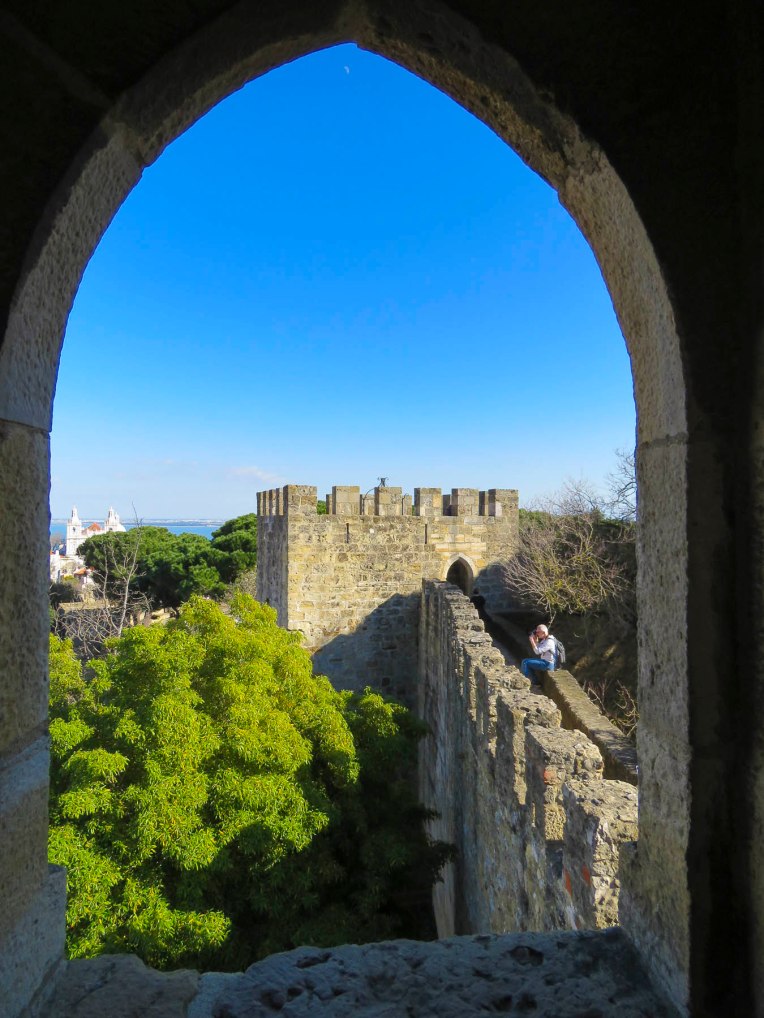 Archeological excavations next to the Castelo de Sao Jorge have revealed evidence of a Phoenician settlement that dated to 1200 BC, a Roman amphitheater, and walls built by the Visigoths before the Moors arrived.  Today the rumbling sound of wheeled suitcases on the cobble stone alleys echoes, almost continuously, off these walls weathered by time. Tourists make their way to newly renovated Airbnb’s, as we did, much to the concern of older residents of Alfama who worry about being gentrified out of their homes. 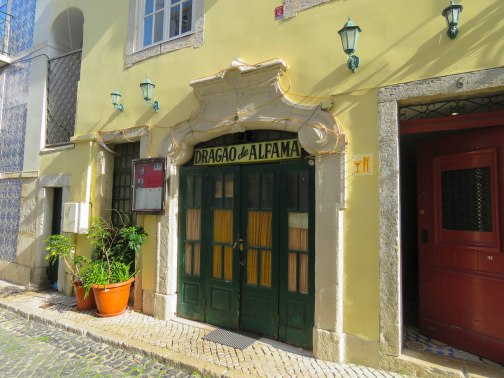 Our home for the month of February was a small, one-bedroom apartment, with a college dorm sized refrigerator above a Fado restaurant, just a few guitar chords away from Miradouro Santo Estêvão Belvedere that offered views of Alfama and the Tagus river below.

Like our neighbors, we hung our laundry from our windows to dry.  Most evenings the melancholic melodies of traditional Fado music drifted softly down Alfama’s alleys from several restaurants nearby.

While walking downhill was initially a good thing, it eventually led to us walking uphill and in Alfama it’s impossible to avoid.  Older folks walking with canes was a common site, since the cobblestones are so uneven and treacherous to walk on.  Choosing a career as an orthopedist almost guarantees success in Lisbon!  Fortunately, around every corner there seemed to be a mercado that carried basic items and catered to residents who didn’t want to leave their block.  We preferred to walk to the Graça district to shop at Pingo Doce, a terrific small supermarket chain, which was half a mile away.  It’s good we walked so much, as there wasn’t a bakery or pasteleria we couldn’t resist trying. They were so affordable, with prices at least seventy-five percent less than back in the States. We had a favorite butcher’s shop and seafood store.  An amazing variety of seafood was available, but our tiny kitchen barely had any prep room. One night as we prepared fish, we were surprised learn that our stove would trip the circuit breaker and plunge us into darkness if the electric heater was also on.  “Oops!” was not the word that we uttered that night as we fumbled for the circuit box in the dark.

The wine and cheese produced in Portugal are exceptional, and an extremely good value, with each region renowned for a specialty. A very good wine can be purchased in the 10€ range, and a delicous bottle of Vino Verde, a young green wine, can be bought for less than 5€. We made destinations of recommended cheese shops, Queijaria Naçional and Queijaria Cheese Shop, and made a day out of the shopping expedition.  For chocolate lovers, a visit to the tiny shop of Bettina & Niccolo Corallo for a sweet treat and coffee is a must. Lisbon scored very high on our cappuccino, beer and wine test. The former were in the 1.50€ range, and the latter a reasonable 3.50€ a glass.  This was much more affordable than Antigua, Guatemala.  We found meals and drinks to be fairly priced all over Lisbon, even at the miradouros, the scenic overlooks.  At the famous Pastéis de Belém, where tourists would have willingly paid three times as much, the sweet pastry was less than 1.25€. 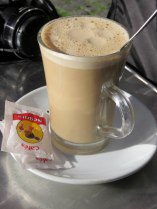 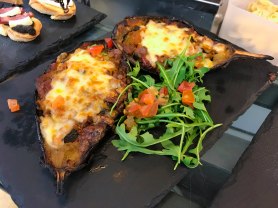 Wonderfully, tourist trap pricing seemed to be unheard of.  (We experienced only one incident of price gouging while in Portugal,  in Porto at the highly over-rated Café Majestic.) For dining in our Alfama neighborhood we tried Beco a Serio, Taberna dos Clerigos (Tavern of the Clergy), and Alfama Cellar, which was our favorite. Lisbon was culinary heaven and extremely gentle to our food budge with comparable lunches and dinners costing 50 – 60 percent less than in the States.

Considering we’ve been on the road over 250 days we have been relatively healthy.  But for Donna, a persistent sinus infection led to an ear infection and the challenges navigating the Portuguese medical system.  New to Lisbon and not knowing where to go for treatment we asked our host for recommendations.  “It will take longer to get treated at public clinic, but there is one nearby in Graça, or a private hospital.”  Arriving at Unidade de Cuidados de Saúde Personalizados (Mónicas) to a full waiting room at the clinic, the receptionist told us it would be better to come tomorrow at 8:00 in the morning to get in queue, as the day’s schedule was full already.   By chance as we were walking home, we noticed a doctor’s plaque on a door, walked in and waited patiently for the receptionist to address us.  Luckily, the doctor could see Donna later that day.  The office visit cost 65€, with a free follow-up visit, and the prescriptions only 20€.  Unfortunately, the ear infection did not clear up after the first round of antibiotics and we were advised to go to the walk-in nurse practioner clinic Centro de Enfermagem da Graça, nearby on the plaza to have the blockage evacuated.  With still no relief, the doctor sent us to an ENT, an ear, nose and throat specialist, at CUF Descobertas Hospital, a private hospital in Braco De Prata.  Outpatients enter through the emergency room and are directed to take a ticket, like in a bakery, and watch for the number to appear on the large overhead monitors in the waiting area.  Initially, we were called to the bursar’s counter to give all our information and passport number, plus a 500€ credit card deposit to secure services.  Back to the waiting area to be called to the triage room to be assessed correctly and then sent to a different waiting room, deeper in the hospital, before being called by a nurse and led through many corridors and elevators to the ENT waiting area.  A short time later we met the ENT specialist who provided a thorough ear exam, diagnosis and treatment plan.  Total – a whopping 140€ for a visit to a specialist!  This could not happen in the States even with health insurance.  Finally, back to the bursar’s counter where our credit card was refunded the unused balance.  Note: keep all your medical invoices. Our travel insurance provider World Nomads reimbursed the hospital and doctors’ visits along with all prescriptions.  Processing the claim went flawlessly online and our refund was electronically deposited. 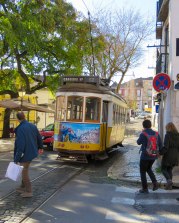 Exploring the different areas of Lisbon was a breeze using the tram and subway system.  Tram 28, famous only because it is the longest line in the city and hits most of the top tourist sites along its route, had several stops close to our apartment. 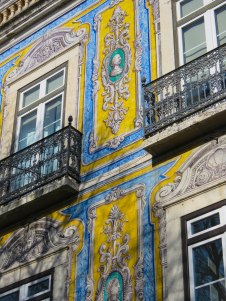 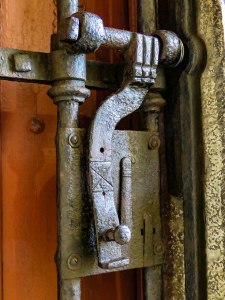 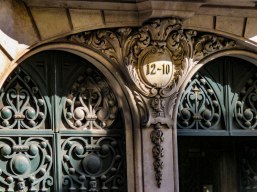 Purchasing a Viva Viagem transit card allowed us to pay the same rate for a ride as Lisboans.  A single use ticket on the tram was 3.60€, with the Viva Viagem card it dropped to 1.40€.  It also reduced the fare on the funiculars and Elevador de Santa Justa.  You can purchase the Viva Viagem at most subway stations that have a staffed ticket office.  We also used Uber and the local taxis; both were very reasonably priced with a trip into the city from the airport costing under 10€. 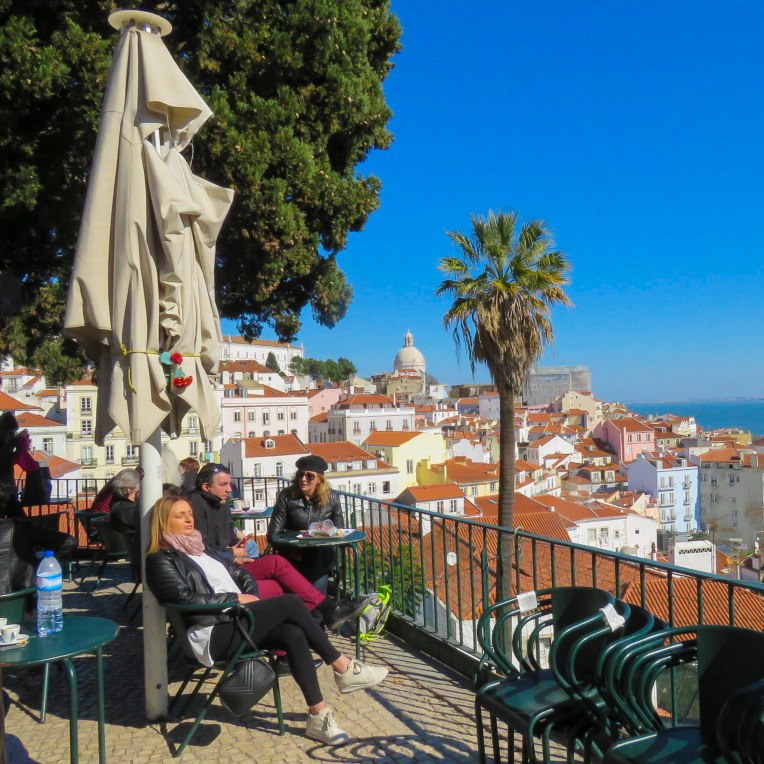 Residents told us this past February was unseasonably mild.  We enjoyed eating outside in the warm Spring sun as did many other tourists.  The streets seemed very busy for the “off season,” not overly so, but we couldn’t imagine what it would be like during the summer crush.

We will share our day explorations around Lisbon in several future blogs.

Till then, safe travels.  Craig & Donna