There is not a definitive count, but it’s thought that there are nearly two hundred rock churches scattered about the remote northern highlands of Ethiopia. The highest concentration of eleven in one locale, collectively known as the “Rock Churches of Lalibela,” is the most famous. In the immediate rural area surrounding Lalibela there are several additional rock churches and ancient monasteries worth seeking out.  Asheten Mariam Monastery is perched at 11,500 ft on a lower ridge of Mount Abuna Yosef, (at 14,000 ft Ethiopia’s sixth highest mountain) and St. Na’akuto La’ab Monastery behind a waterfall, both located southeast of Lalibela. Farther afield, to the north of Lalibela, St. Yemrehana Krestos and Bilba Kirkos Church lie in remote farmlands.  All four required a little more physical effort to get to, but were well worth the effort. 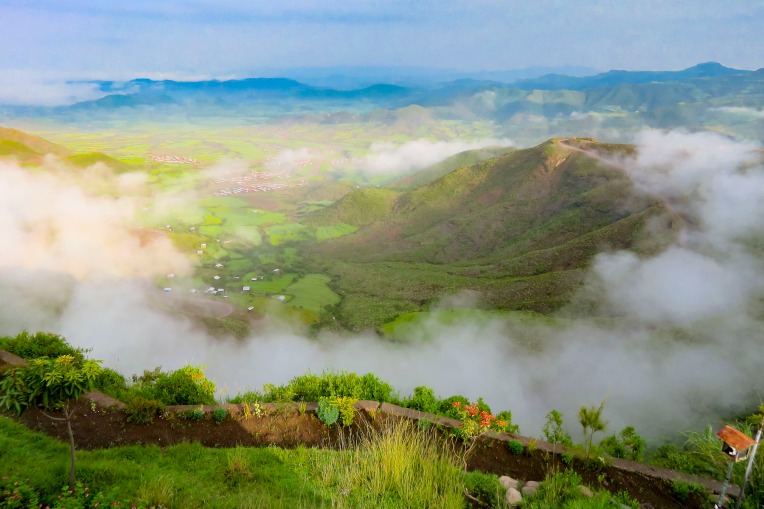 We started our day listening to bird calls and watching the morning clouds burn off from the valley below our hotel as the sun rose higher into the sky. The Mountain View Hotel Lalibela was the perfect spot on the outskirts of town, with extensive views and a wonderful variety of birdlife in the trees outside our room.  Farther along the ridgeline was an odd, futuristic structure that looked like it was a tower for a water ride in an amusement park. 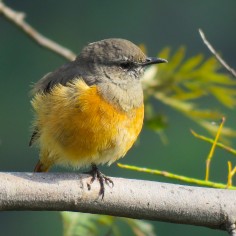 The day before after touring the Lalibela churches, our guide suggested we hire a driver with an SUV to take us into the mountains. “We can drive to the end of the dirt track, but then it’s another forty-minute hike to the monastery,” Girma explained. “How difficult is the trek?” “It’s a gradual climb until the end and then there is a short steep section,” he replied.

The shops were busy, and the roadside Ping-Pong games were in full swing as we departed Lalibela. The road into the mountains rose quickly from Lalibela into a semi-forested landscape. Too steep for crops, the land was used for cattle, which grazed on clumps of wild grasses on the hillside.  We stopped at one clearing for the view and noticed a herder gently nudging his cows away from recently planted tree seedlings.  “This is part of our government’s commitment to reverse deforestation and help mitigate climate change. It’s called the Green Legacy Initiative,” Girma shared. 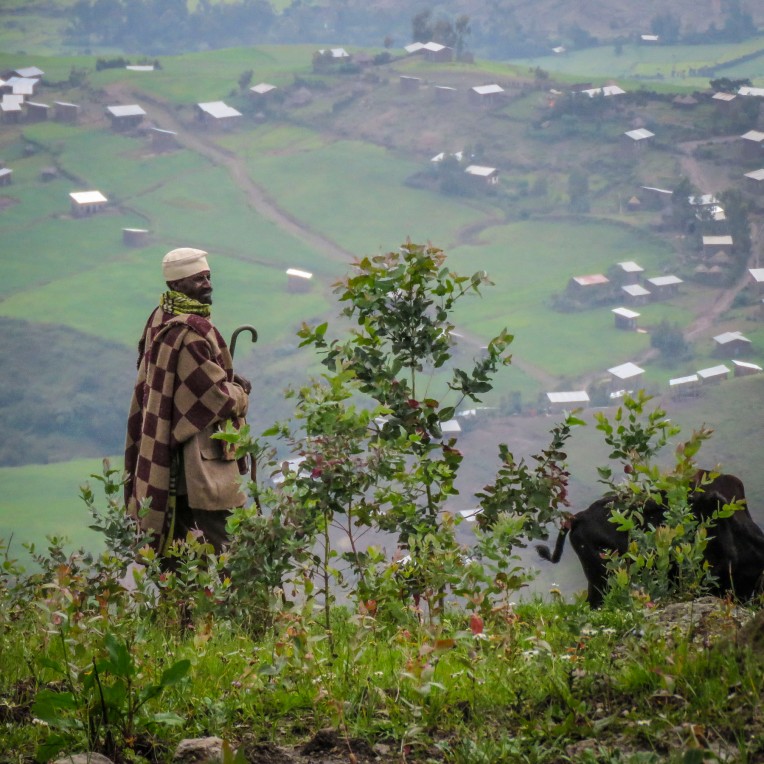 “On July 29th Ethiopians planted 350 million trees in a single day, a world record!” he proudly shared.  “The farmers know how important this is and help shoo the cattle away, but the government has also chosen a tree seedling that doesn’t taste good.” This annual Ethiopian project is part of the African Union’s Great Green Wall initiative to reclaim arid lands that border the Sahara Desert with a living wall of trees.  This belt of greenery will stretch from the Atlantic Ocean to the Gulf of Aden. 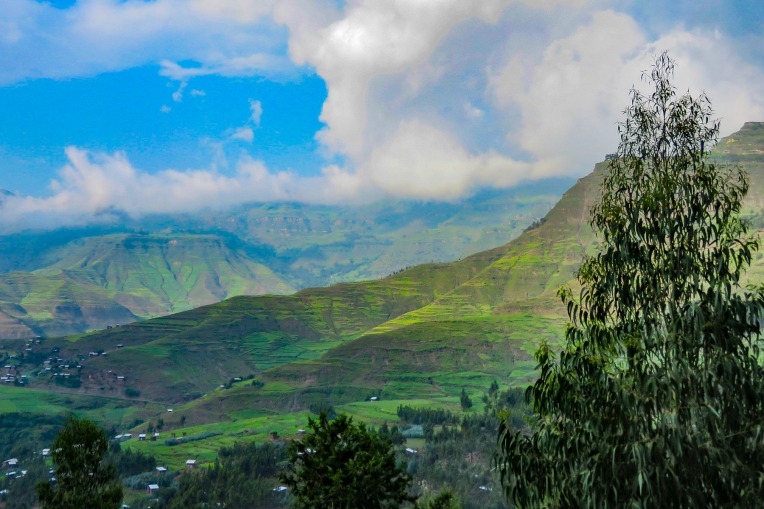 The road deteriorated after this, with deep mudded ruts tossing us from side to side regardless of how slowly we navigated through, over or around them. Our “rattled tourist syndrome” is the most appropriate way to describe the ride, while optimists might refer to it as an an “African deep tissue massage.” We were the only truck to park at the trailhead to the Asheten Mariam Monastery and were greeted with children selling handicrafts, and young men renting walking sticks and offering to accompany us on the hike. 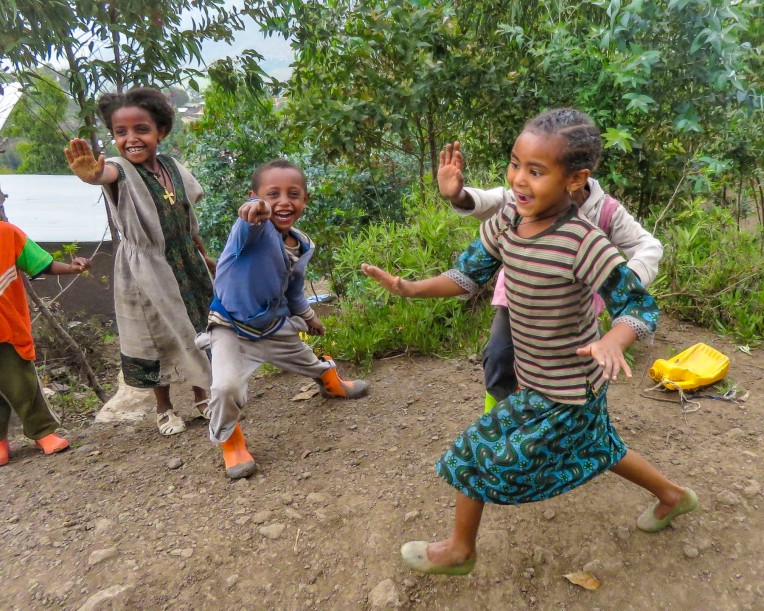 Confident in our abilities we declined, but they tagged along anyway. This was a good thing. What our guide had forgotten to mention was that there was a short steep section at the beginning of the hike, before it leveled off. Within minutes, between the altitude and the terrain, our hearts were pumping and my wife, who struggles with asthma, was gasping for breath. We are unfortunately not the 7 second 0-60mph vroom, vroom of a 1964 Corvette anymore, but more like the putt-putt of a classic Citroën 2CV. We get there, eventually. So, our guide, forgetting his youth and our age, led the way from a distance, as if he was channeling Shambel Abebe Bikila, Ethiopia’s famous marathon runner.

It was at this point that my wife spoke up. “Girma, you must think of me as the same age as your mother.” Instantly, his attitude became very solicitous, and he smilingly offered her a hand or other assistance at every opportunity. We marveled at the agility of the local kids. They nimbly scampered up and down the trail, easily outdistancing us, in order to set up their little trailside displays of carvings and beadednecklaces. When we didn’t purchase at first, they simply packed up and reappeared further up the trail. We had to reward such perseverance with a couple of purchases. 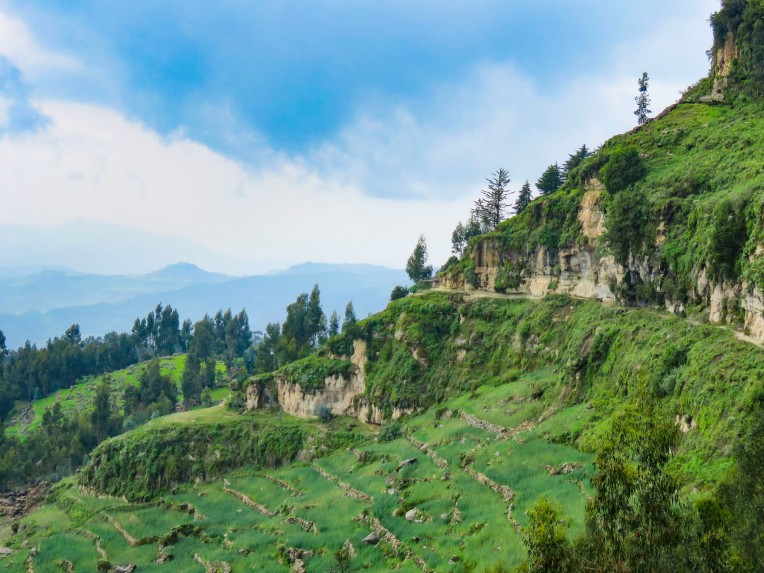 Meanwhile, we regained our pace as the trail leveled off and tracked along the base of a cliff face that fell away to terraced farmland far below.  The incline of the trail continued to rise; the walking sticks were now invaluable in helping us steady our footing on the rough path.  Around a curve the trail abruptly narrowed at a sheer rock wall broken by a vertical chasm, slightly wider than our shoulders.

Occasionally we had to plaster ourselves to the rock wall to make room for descending parishioners to pass. It took a moment for our eyes to readjust to the brilliant sunlight after emerging from the darkness of the tunnel as we exited onto a plateau above the highlands.

A young priest answered our knock, greeted us and led us into a small chamber lit only by the light of the open door. The priest proceeded to show us the treasures of the church: a large ebony cross, 900-year-old parchment manuscripts, elegant processional crosses and illuminated Bibles, as well as iconography.

Imprinted at the bottom of a page in one ancient text were the thumbprints of the ten scribes who helped copy the book. Legend has it that it was the first church ordered built by King Lalibela during his reign in the twelfth century and that his successor, Na’akueto La’ab, who only ruled for a short time, is buried there. 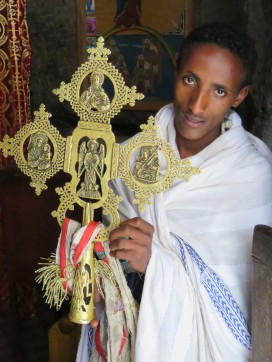 The way the church is cut from the mountain made it difficult to get an overview as part of it is obscured by protective roofing. The real rewards of this endurance trek were the fantastic panoramic views over the Lalibela highlands.  Awareness of your surroundings are vital here as there are not any safety railings at the cliff edge. The walk back was slightly less difficult, but the young men who tagged along and assisted truly earned their payment. Back at the trailhead, parked next to our truck was a tiny blue, Fiat Panda, a sub-compact car with extremely low road clearance. How it managed to traverse the same rutted road we drove hours earlier remains a mystery to us.

Our guide suggested we lunch at Ben Abeba, a curious lunch spot that turned out to be that futuristic building visible from our hotel.  Its spiral ramps led to various dining platforms from which we watched raptors soaring along the updrafts of the ridge.  The food was exceptionally good. But there was a quirky feature of the restaurant that we found very amusing. The restrooms were something out of a science fiction movie, with cylindrical stalls that resembled cryogenic tubes. It was definitely a Lalibela oddity.

St. Na’akuto La’ab Monastery was closer to town. As with many rural communities, Lalibela included, the cluster of development ended abruptly, and we were instantly in the countryside. Villagers in robes walked purposefully to church along the road that bordered their fields, as we made our way to the hermitage.

Coming to the end of the road, we could see the monastery dramatically situated behind a small waterfall, in a long shallow cave at the bottom of a cliff.

It was an easy short walk, from where we parked, down a trail with noisy birdlife. The buildings behind the entrance wall to the cave are not particularly unique; it’s their location that’s inspiring. The oneness with the natural environment.

Stone bowls smoothed from centuries of use sat in various places on the rough floor to collect the water seeping from the cave’s ceiling one drip at a time. It gets blessed by the priest and used as Holy water, continuing a tradition from the 12th century when King La’ab ordered the monastery’s creation. 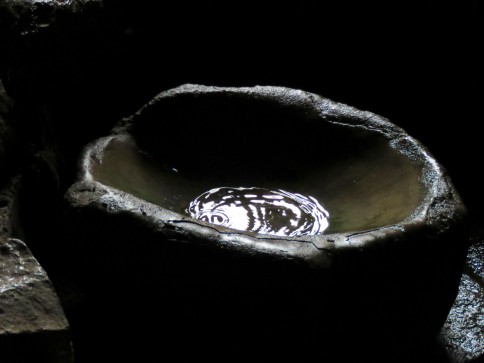 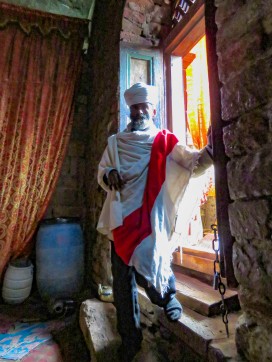 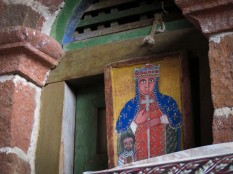 “Miraculously the water has never stopped flowing since the monastery was built,” the priest shared as our guide interpreted. Outside doors to the monks’ cells lined the exterior wall as it narrowed into the cliff face. 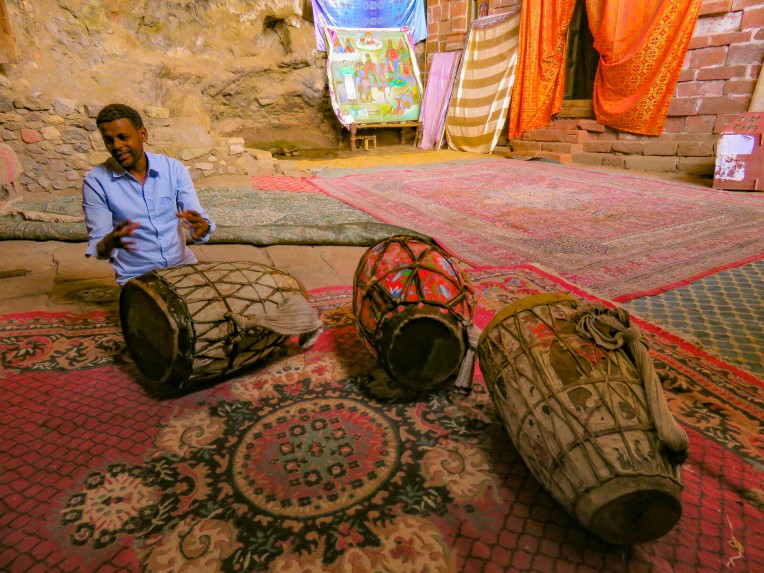 In the learning area, layers of carpet attempted to smooth an uneven, rocky floor where the novitiates sit to learn the ways of the orthodox church. In the corner rested several large ceremonial drums used during worship services. Picking one up our guide beat out a rhythm that would normally accompany liturgical chanting, or Zema, by the young monks. We’ve noticed that the treasures of the Ethiopian churches are not determined by their monetary value and locked securely away, only to be used on religious holidays, but by their spiritual connection.  Precious, irreplaceable, ancient bibles and manuscripts, lovingly worn and torn as they are, continue to be used every day, as they have been for the last nine-hundred-years.