After getting some up-close shots of warthogs feeding on the lawn in front of our room, we loaded our bags into the Landcruiser and headed south to the Konso region with our guide and our driver. 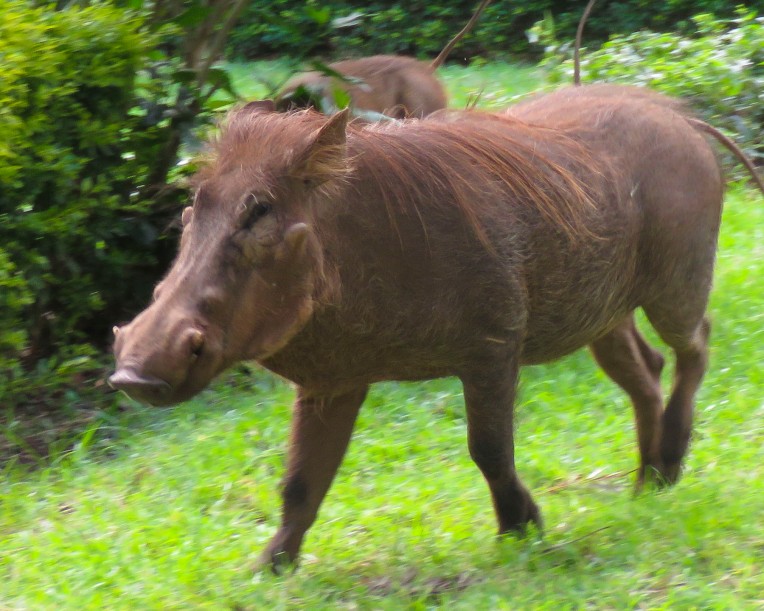 The highlands area is home to the Konso people who are renowned for their ringed hilltop villages, fortified with stone walls. They have developed terraced farming techniques to survive in a semi-arid, rock strewn and hilly territory for almost seven-hundred years.

As we entered the town of Konso, bundles of candles miraculously appeared from under our guide’s seat and we stopped to donate them to a young man collecting offerings in front of his Ethiopian church.  This was the guide’s ritual when we changed territories and it continued throughout our trip. It was a common sight to see small groups of parishioners walking along the road holding up a picture of a beloved saint and umbrellas for shade. 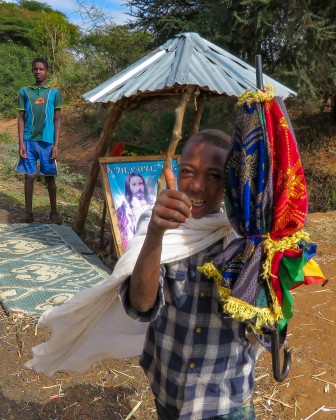 The main street through town was lined with bustling shops. Their services and merchandise almost spilled into the street.  A rutted dirt field served as the bus depot and on the day we passed, a large crowd danced in undulating rhythm to see off newlyweds.  As remote as southern Ethiopia is, it has a rural minibus system that connects distant villages. The buses are always jammed full of folks, while their belongings are haphazardly tied to the roof. 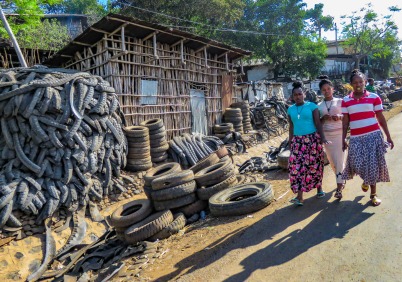 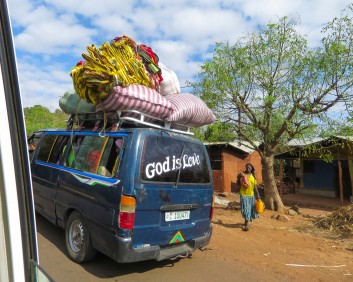 The creative hand of man was clearly evident in the sculpted terracing we could see from the road leading to the Gamule Konso Cultural Village, a UNESCO World Heritage site.  Staple crops of barley and wheat are grown along with crops of maize, chickpeas, beans, yams, taro, turnips, coffee, tobacco and cotton.  The terracing tames a once inhospitable terrain into productive farmland. 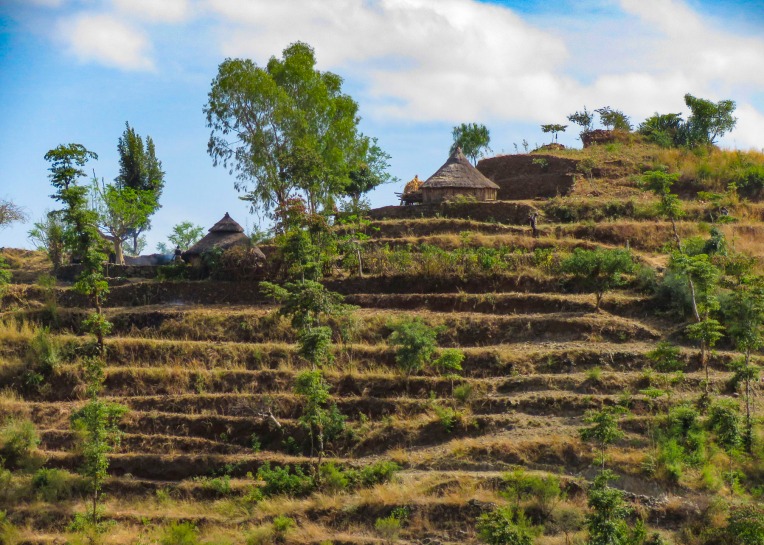 As we walked to the center of the village young children following us jumped from rock to rock, along the tops of the tall walls built to protect the village, as we made our way along the path below. 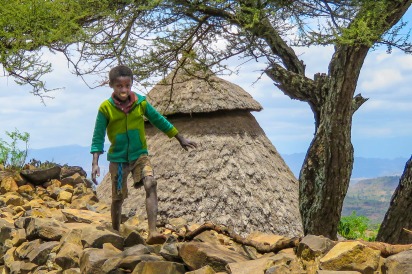 Set on a hilltop the village, called a paleta, is ringed with six concentric, high stone walls.  Each ring was added as the population of the village expanded downhill. Within these defensive walls are fenced family compounds with pens for a small number of animals and sturdy huts and granaries constructed of tree branches, adobe and thatch along with moringa trees, from which the foliage is an important and delicous food source. 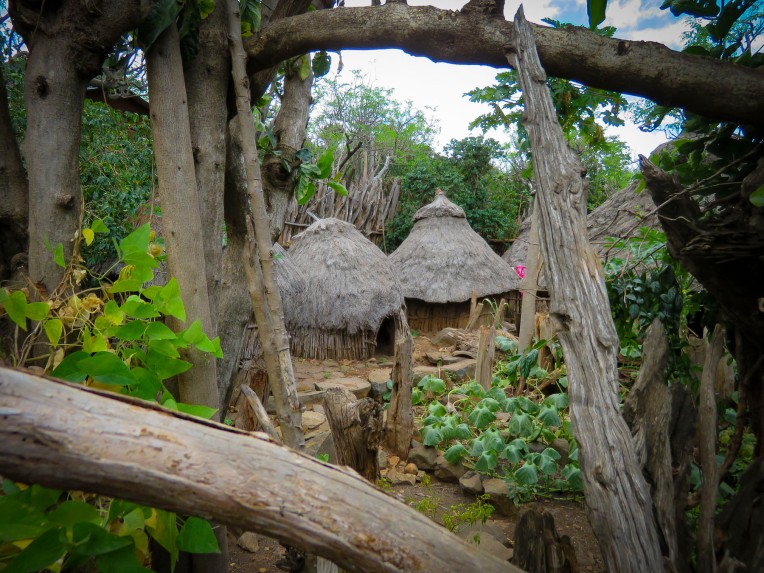 Each ring also has a community area called a mora; this is a large thatched roof structure with an open lower level and an enclosed upper platform where the married men and bachelors of the village sleep. 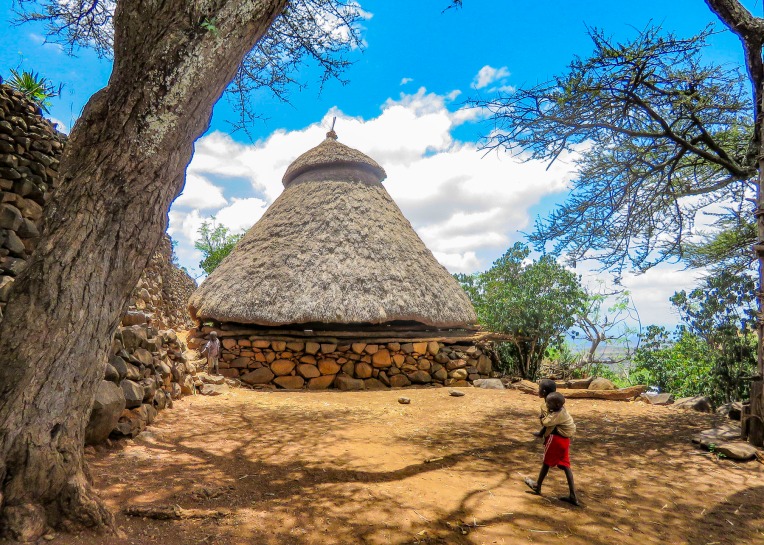 More importantly it provides a shaded meeting place where men play gebeta.  It’s considered the oldest board game in the world and is played simply with stones, beans or seeds being moved around holes in a board with the goal to capture as many of your opponent’s pieces as possible.  Each village is also divided into two zones and a man born in one zone must always have his homestead in that zone.

The Konso also erect generation poles, called olahita, which are raised every eighteen years. The olahita are made of cedar trees taken from the kala, a sacred forest. Gamule village had eighteen olahita which dates the village to be nearly 400 hundred years old.  Sadly, the oldest central poles have succumbed to termite damage and rot over the centuries. The oldest village in the Konso region is Dokatu which has 43 olahita. Near the olahita was the village ceremonial daga, a large rock, that teenage boys lift over their heads to prove their manhood and eligibility for marriage.  The Konso also carve waka, grave makers, in rough likeness of the deceased.  These were originally placed at the grave sites in the sacred forest, but have now all been brought back into the village to deter looting.  Each village is surrounded by a dina, or grove of trees, which acts as a buffer between the village and agricultural terraces. This buffer of trees was meant to inhibit attack on the village and provide an area close to the settlement where folks could forage for firewood. There are 36 paletas, with populations ranging from 1,500 to 3,000 in each village, scattered across the Konso territory.

Nearby outside the Konso village of Gesergiyo there is a unique landscape nicknamed “New York.” It’s a dramatic red sandstone canyon, that looks like it was violently carved from the earth, with deeply scarred walls and tall pinnacles created from millennium of erosion. Legend says Waga the Konso Sky God created these as he searched for a buried sacred drum.

We didn’t really see the NYC comparison, but the landscape was interesting in that it contrasted sharply from the surrounding terrain.  And the encompassing territory is beautiful with vistas of rolling hills.  Driving away a group of young men were perched on a lone boulder, just passing time. 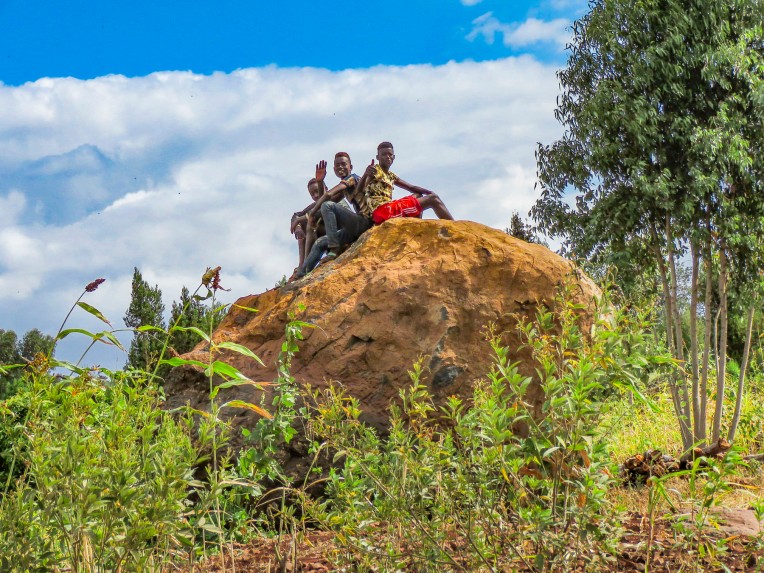 We arrived late in the afternoon to the Konso Korebta Lodge, situated high on a hill. It was a relatively new complex with attractive, circular stone huts topped with steep thatched roofs and beautiful plantings of bougainvillea.  Desperately needing showers, we were flummoxed when the tap was dry and headed to reception to see what was up. Unbeknownst to us it’s common practice at hotels throughout the countryside to only turn on the electricity and water between 6:00 – 9:00 in the morning and 6:30 – 10:00 in the evening to conserve resources.

Thankfully, the staff called the owner to get permission to start the generator early for us. Back seat driver that I am I thought our driver drove fast, safely but fast to cover the great distances we had to travel.  So, we were surprised the next afternoon when he was tootling along very slowly to get back to the hotel.  Evidently the hotel owner made it very clear to our guide that he would not turn on the generator early again.

Later we traced the aroma of barbeque to a small garden area where the staff was grilling goat skewered on small tree branches over a fire pit dug into the ground.  It was in preparation for a wedding party that was due to arrive.  With military timing it seemed, suddenly the parking area in front of the hotel’s restaurant was full of honking minibuses discharging joyous celebrants.  It was a short indoor-outdoor event that climaxed with song, dance and well wishes for the couple. 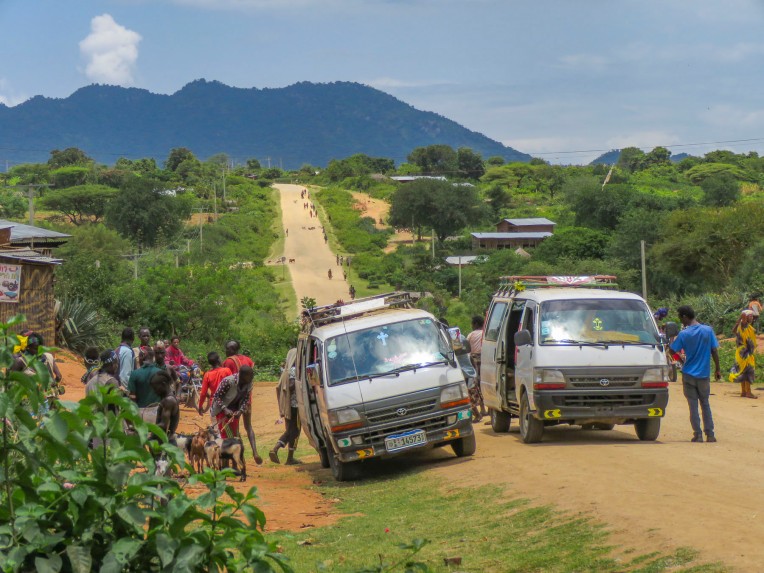 Market days are huge events in the rural areas and folks from various tribes travel for miles to attend them.

Not just to buy or trade supplies; it’s also a cherished opportunity for men and women to socialize with friends and extended family from other villages, often in raucous beer halls which could be in a makeshift shed or more often a spot under a large shade tree that serves a local brew. 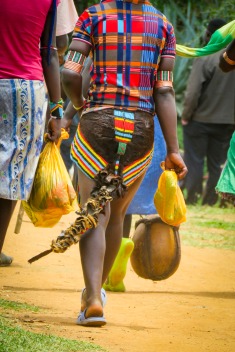 Many folks look and dress their best as it’s also a chance to find a future husband or wife.  The Alduba market was exceptionally large, spanning both sides of the main road, and it attracted folks from the Ari, Bena, Hammer and Tsemay tribes. Recently the government constructed a bricked wall corral at the market to show tribespeople that the government was interested in their wellbeing and that local folks are actually part of a greater Ethiopia.  And at the same time it started to collect taxes on every head of cattle sold.

We were able to take many candid photos as we followed our guide through the market to its various parts. Ceramic pots, handmade tools, ropes and leather goods produced by different tribespeople were available as were pots, pans, cloth and sandals produced in China. 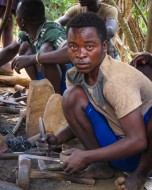 One older woman shared with our guide that she was in her seventies and walked six miles to the market to replace a ceramic cooking bowl that had recently broken.  Often, we would stop and ask a person if we could take their picture.

Many folks were very receptive to this and our guide would negotiate a fee.  And even though we paid for the privilege to take their photo, they seemed pleased that we admired their style. A few, however, angrily waved us away. 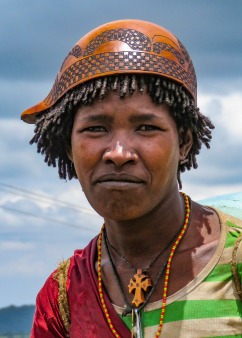 Later in the day we headed to Jinka, the largest town in the region, slowly getting closer to the Omo Valley with every move.  Traveling through a xeric landscape, we had a long stretch of dirt road to ourselves.

Pulling over occasionally to take photos from scenic overlooks along this isolated track, we were always surprised when, in the middle of nowhere, a young man selling souvenirs would emerge from the shade. Later we would come across an enterprising group of young stilt walkers urging tourists to stop for photos – and of course we did.

Entering Jinka, we noticed signage for the International Airport (BCO, though we are pretty sure you can only fly in from Addis Abba.) We might have arranged our trip differently if we had known this previously as it would have eliminated two eight-hour drives from and to the capital. Note: if you fly into Ethiopia on a ticketed Ethiopian Airways flight you are able to purchase discounted domestic flights .  Our guide booked this discount for our us on our Addis Abba to Lalibela flights. 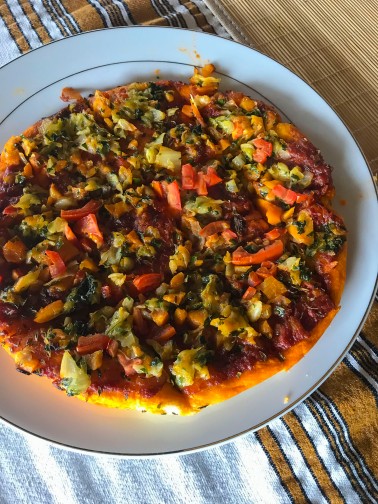 The Orit Hotel offered very basic accommodation, but it had a wonderful garden restaurant, good food and cold beers.

The next day we would head into Mago National Park to visit the Mursi tribe.