“Set it to avoid toll roads?” “Yep.” And with that our mapping app committed us to back roads for our journey to the Portuguese frontier. The medieval hilltop citadel of Marvão,  located along the border with Spain, was our day’s destination.  We had just wrapped up a splendid month in Lisbon, but were looking forward to a fifteen-day road trip exploring the smaller villages of the Portuguese countryside, between Marvão to the east of Lisbon and Porto to the north.

Leaving Lisbon behind, we crossed the graceful Vasco da Gama suspension bridge spanning the Tagus River.  Within minutes we entered a gently rolling landscape of cork, olive and chestnut orchards dotted with sheep grazing in the shade beneath the trees.  Along the roads, storks were building their nests atop powerline towers or the chimneys of abandoned houses.  These stunning birds, having just completed their seasonal migration north from Africa, are always a joy to watch and we interpreted their sighting as a sign of good fortune ahead.  Heads turned as we passed through small farming towns more used to seeing the twice daily bus or farm tractors rumbling along than unfamiliar tourists cruising through.  Each village, regardless of how small, had a café, which was the center of activity.  Short on atmosphere, they offered espresso or cappuccino, just as good as in Lisbon, along with a limited selection of sandwiches and pastries. 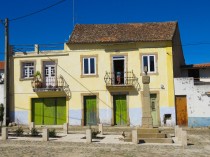 Crossing the Ribeira de Seda on a high modern overpass, we spotted a large old stone bridge below.  The next exit led us down to Ponte de Vila Formosa, an impressive 2,000-year-old Roman bridge with six arches dating to the 1st century CE.  This 330-foot span was once a vital crossing on the Roman road linking Lisbon to Mérida, Spain.  Today it’s one of the best-preserved examples of Roman engineering remaining in Portugal.  Closer to Marvão is a one arch bridge built in 1494, and not nearly as elegant or substantial as the Ponte de Vila Formosa. We wondered how a royal carriage ever crossed it safely.

Typically, we double the amount of time it’s suggested to get to our destination to account for coffee, lunch breaks and photo ops.  We drive, we stop, jump out for snaps, make U-turns and so on.  As the sun lowers in the afternoon sky, “We’ll never get there if you stop every 100 yards to take pictures!” is often voiced from the navigator’s seat. 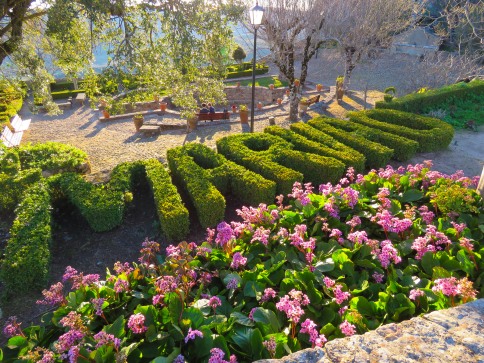 A serpentine road twisted up the side of the 3,000-foot-tall butte, occasionally offering a glimpse of our formidable destination high above.  Driving through the slender entrance gate, the portal narrowed to the point where we had to pull the mirrors in.  It seemed the further we drove uphill the farther time receded. By the time we reached the summit of the walled village and checked in at Dom Dinis, a small boutique hotel, the golden hour was in full glory and bathed the countryside in a warm glow.

The cold wind chilled us to our bones, but we found warmth by the fireplace in the tavern across from our inn.  After dinner, as we stood on the ramparts behind our hotel, the darkness offered us a view of the stunning star-filled sky above and the twinkle of village lights far below.  With a stiff breeze in our faces, we felt like we were flying. The glorious sunrise the next morning cast a beautiful light on the panoramic view of the flat plains that run all the way into Spain, while the rugged mountains and valleys to the west stayed covered in an early morning mist. 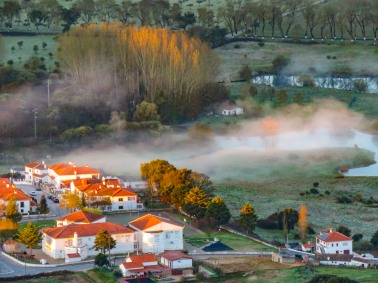 Marvão was important as a strategic stronghold since the ninth century, when the Moors first possessed it, and subsequently improved and expanded upon it over the centuries when the Kings of Portugal controlled it.  The fortress was sacked and retaken many times over the years. Today after extensive restoration it’s possible to walk all the way around the lower town atop the ramparts that encircle it. The castle walls jut from the steep sides of this granite monolith, like the bow of a ship breaking a huge wave.  Within its battlements, storage rooms and an impressively large rainwater cistern helped sustain the town folks when under siege.  As the last line of defense, the entrance to the castle’s tall keep was high above the courtyard and accessible only by crossing a gang plank which was drawn inside for security. 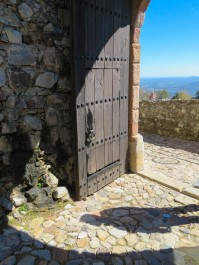 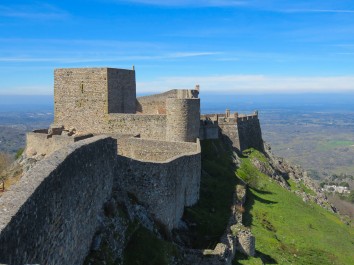 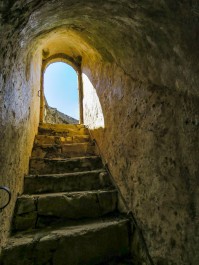 Outside the castle, the hilltop village is wonderful to wander around. It reveals formal garden, narrow lanes and arched passageways that lead to whitewashed houses with decorative, Manueline windows, wrought iron balconies, ancient doors and red tiled roofs.

One of the town’s old churches, Igreja de Santa Maria, has been converted into a civic museum with interesting displays explaining the history of the area. 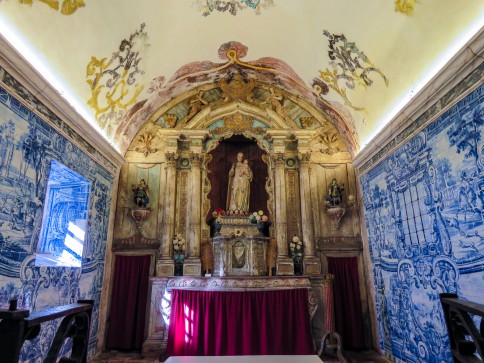 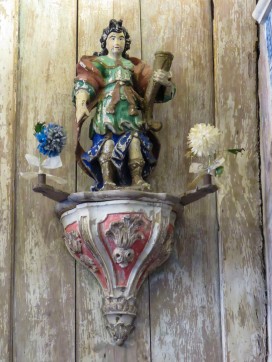 Fortunately, in 2017 Marvão requested to be removed from the UNESCO tentative site list, so it isn’t on the bucket list of busloads of day tourists from Lisbon.  At one time Marvão was home to 3,000 residents, but today there are fewer than one hundred full time residents living within its walls. We had the village practically to ourselves in mid-March.

2 thoughts on “Back Roads – Lisbon to Marvão”