All week long the gate to Capela dos Alfaiates had been locked with no sign of activity, whenever we passed.  This morning as I headed to our favorite pastelaria to secure breakfast, the gate and the doors of the church were opened wide.  Nothing unusual, just limited hours, I thought. As I opened the inner door to the sanctuary and turned, the sweet aroma of lilies was in the air.  And as my eyes adjusted to the light I suddenly faced a delicately shrouded open casket, by itself in a small elegant chapel.  I quickly left, embarrassed for intruding.  Outside the church nothing indicated that a funeral would begin.  It was not how I expected to start the day.

Later that morning the courtyard of the church was filled with mourners as we walked to the Porto Cathedral, Sé do Porto.  Not far from the old towers and ramparts of Muralha Fernandina, the cathedral commands the highest point in Porto.  The building outwardly reflects Porto’s turbulent past, with crenels capping its massive shape, when it was the last point of refuge while the city was under siege.

Building started in the 1100s, then continued over the centuries. The cathedral combines Romanesque, Gothic and Baroque features, like so many of the other churches in Porto. 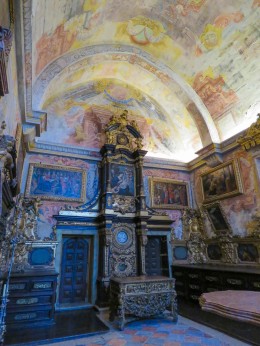 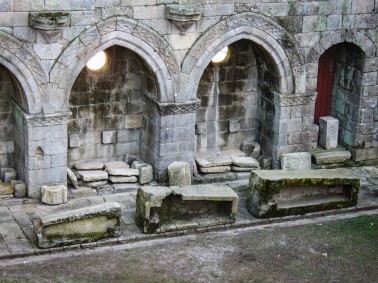 It has a beautiful sanctuary and magnificent colonnaded cloisters lined with the blue and white Azulejo tiles along its walls.  The cathedral’s museum complex next door displays a fascinating wealth of ancient religious items.

Exiting the museum, the Pillory of Porto centers the vast plaza in front of the Cathedral.  Criminals once hung from hooks, still visible, on this graceful Manueline column.  It struck us as such a disturbing juxtaposition, this instrument of punishment and humiliation, prominent in front of the cathedral, constantly reminding the good citizens of Porto not to stray from a righteous path. Today tourists lounge on its steps and soak in the surrounding views of Porto.

Following steps, we descended towards the river to Chafariz do Pelicano, an elegant old 16th century public fountain built into one of the supporting walls of the cathedral’s plaza above.  Flanked by sculpted female figures, water pours from a hole in the pelican’s chest into a lower reservoir before flowing out of the mouths of carved faces.

Narrow alleys spurred left and right off the steep stairways.  Taking one we came across a lavadouro público (communal laundry) that appeared to be recently rebuilt with new wash basins and roof. 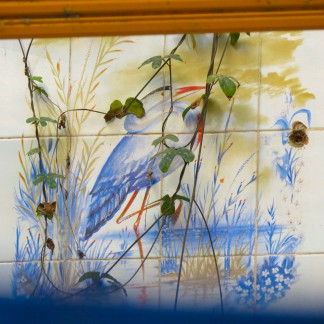 No one was using it when we walked by, but drying laundry hung from the rafters.  The alley was a contrast of old and new.  At the street level modern galleries, boutiques and restaurants sporadically lined the flagstone lane, while above neighbors chatted effortlessly across its narrow width.

Eventually our route merged onto the quay near Fonte do Cubo, a modern sculpture installed upon the ruins of a 17th fountain by the late José Rodrigues, who made his home in Porto.  Behind the square a three-story high fountain covers one wall.  At its center is a 21st century statue of St John the Baptist, done in a primitive style, by João Cutileiro, another famous Portuguese sculptor.  Surrounded by lively, outdoor cafes and throngs of tourists, this is ground zero for the Ribeira waterfront. 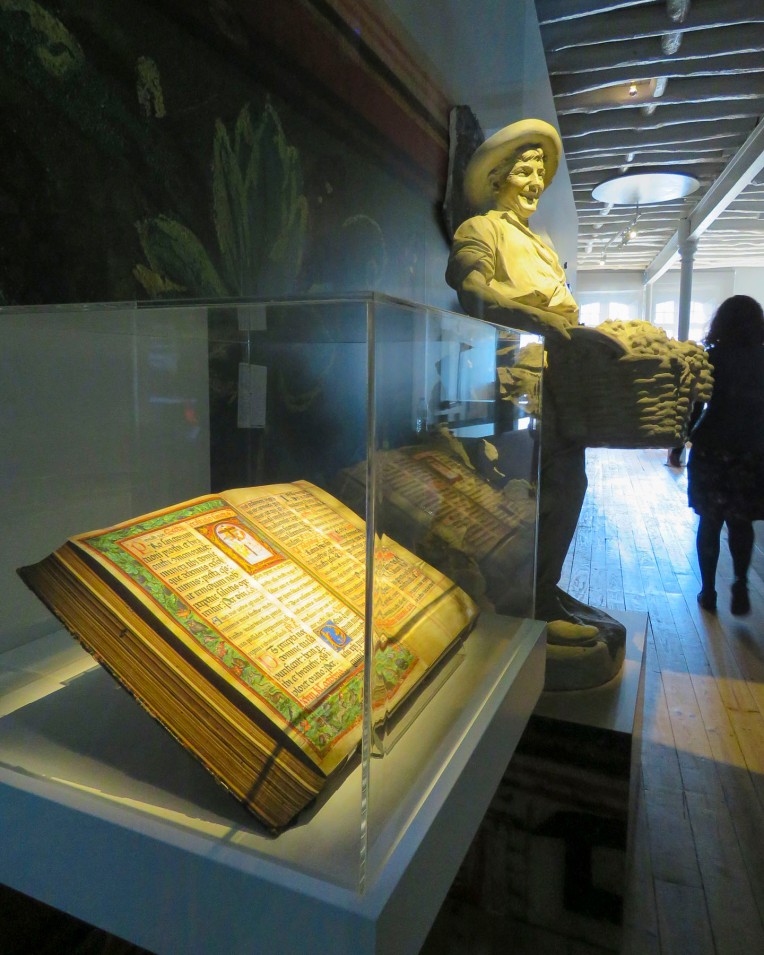 Walking past the Museu do Vinho do Porto on Rua da Reboleira, we headed to Igreja Monumento de São Francisco, also known as the gold church, to check out its ornate, gilded interior and crypt. 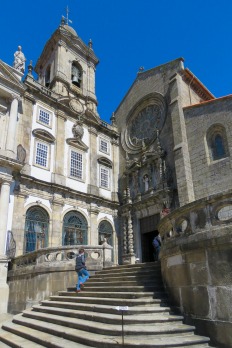 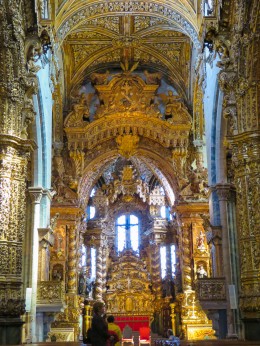 The church sits atop a steep set of stairs that rise from Rua Nova da Alfândega, giving it a commanding view of the river.  Started by the Franciscans in the 13th century, what was once a small church to support their attached convent was expanded and reconfigured over time into the magnificent monument you see today.  Romanesque, Gothic, Baroque and Neoclassical styles blend harmoniously to create an awe-inspiring sanctuary.  There is so much going on inside it’s difficult to decide where to look.  It was not always this overly ornate. 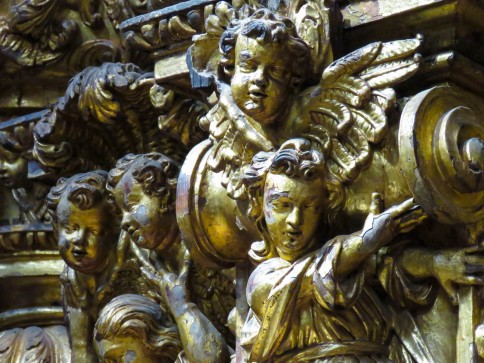 The Portuguese woodcarvers covered every inch of the interior with exuberant sculptures in the early 1700s and then an estimated 400 kilos, 880 pounds, of Brazilian gold dust was used to cover them.  The “Tree of Jesse,” a polychrome sculpture depicting the family tree of Jesus, is a notable example of the technique that is also widely used to decorate the walls. The extravagant display of wealth was too much for the poverty-stricken neighborhood surrounding the church and in protest it was closed for several years.

The church was plundered during the Napoleonic Invasions and used as a stable by French occupying forces.  Then later that century during the Portuguese Civil War the city was bombarded and the cloisters burnt to the ground, never to be rebuilt.  The large crypt under the church was the final resting spot for many of Porto’s famous and wealthy citizens and, as catacombs go, is worth a short visit. 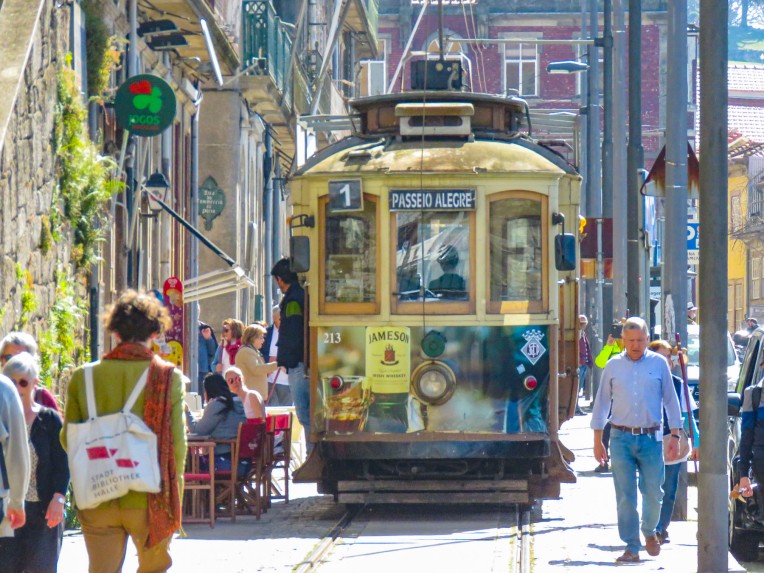 It was time for a change of pace. Being so close to the Atlantic Ocean we decided to take Tram Line 1, which conveniently had a stop in front of the cathedral, all the way out to the Foz district, where the mouth of the Douro River empties into the Atlantic Ocean.  There was a short queue waiting for the tram, but fortunately with the arrival of a second tram we able to snag a seat for the journey.

This is the longest tram route in the city and follows the serpentine riverfront for a rattling twenty minutes past a scenic array of Port warehouses, churches, shops, museums and discotheques, before traveling under the Ponte da Arrábida bridge and ending near the Felgueiras Lighthouse at Jardim do Passeio Alegre.

Just shy of our destination the route was blocked by a disabled truck on the tracks.  With no quick remedy in sight we decided to jump ship and head to lunch at the nearest restaurant, which happened to be in Jardim de Sobreiras, right next to our roadblock.  Fuga Restaurante & BarFuga Restaurante & Bar with its outside deck was a perfect spot to enjoy some seafood and wine for lunch.

This part of Porto has a more relaxed atmosphere, without the multi-storied buildings of the historic center and significantly fewer tourists, which made it a nice reprieve.  After lunch we followed the pedestrian bike and footpath along the river into Jardim do Passeio Alegre and walked around its fountains before continuing to Felgueiras Lighthouse.  For thousands of years what lay beyond the western horizon was unknown and the curiosity about it would spur Portugal’s Age of Discovery. 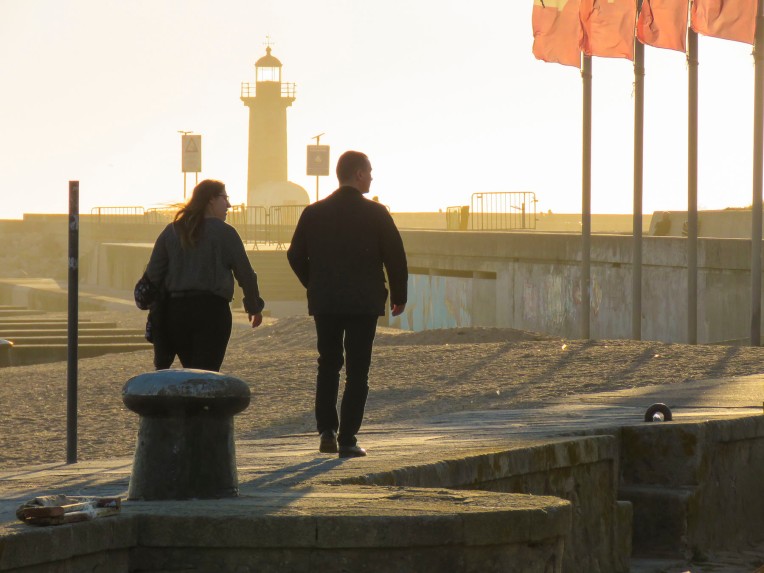 We used an Uber ride to head back to our apartment.  It was only slightly more expensive than our tram tickets would have been.