Our quest for eternal Spring-like weather has brought us to Olon, a rustic beach town on Ecuador’s southern Pacific coast with a wide, flat sandy beach that stretches for nearly five miles without a high-rise to been seen. Think San Juan del Sur in Nicaragua fifteen years ago, before it was discovered, or Costa Rica thirty years before it became a top tourist destination. 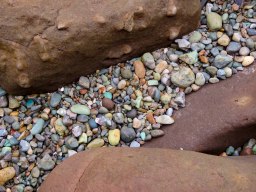 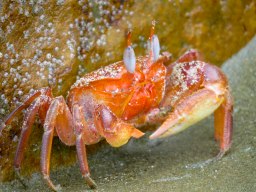 It’s ideal for long solitary walks along the beach collecting shells, especially near the Mirador del Olon cliffs that rise dramatically from the ocean.  On the other end of town, the Rio Olon runs through a nature preserve, where we have entertained ourselves photographing various birds and listening to their calls. It’s amazing how small birds seem to have such loud songs that carry for a long distance.  The river doesn’t have enough flow to reach the sea this time of year and is separated from it by a berm of sand, but one night after a heavy rain the river breached the sand dune and carved its way into the sea. 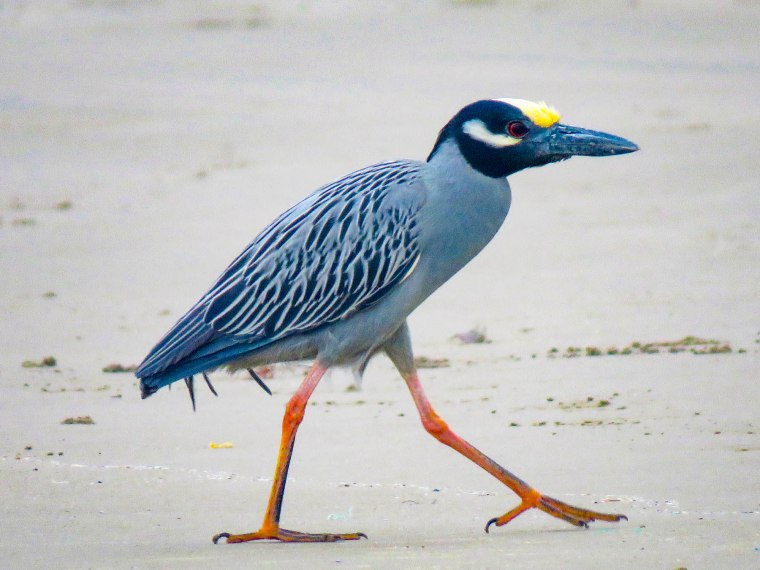 Change is coming slowly to Olon. The roads in town were only bricked three years ago. So, there is still a wonderful, authentic undeveloped rawness to the town, with a small number of hotels and surf schools mixed in amongst local homes, many in an unfinished state. 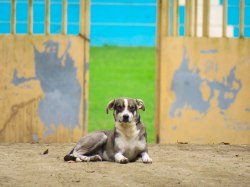 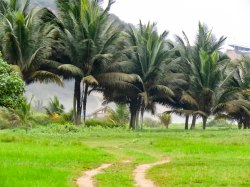 It’s off season now in October, mostly cloudy with a light mist every morning, but the water is still warm, perfect conditions for the handful of surfers and us. Although the waves can reach 12ft at times, beginning surfers prefer the less crowded, smaller wave conditions in Olon over those of Montañita, which can be more treacherous. 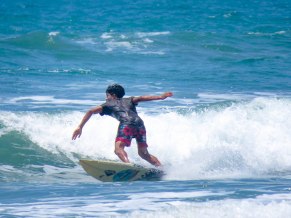 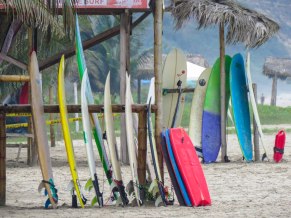 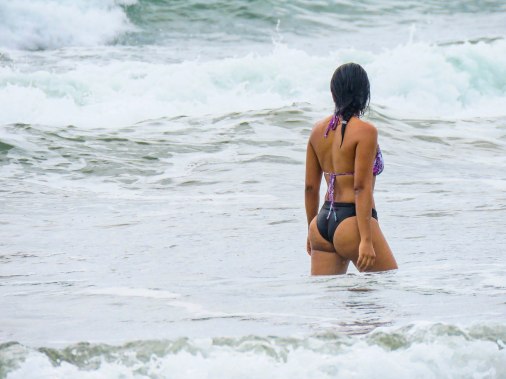 The seafood cabanas along the beach are only open on the weekend this time of year, when it seems to get slightly busier. Our favorite is the last one down by the fishing boats, Mar del Sol, run by Rosa.  You can’t beat her stuffed calamari, ceviche or various seafood salads. 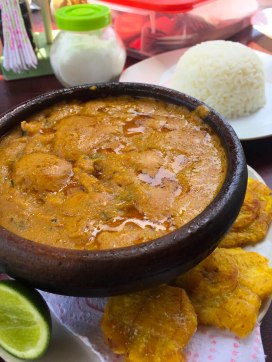 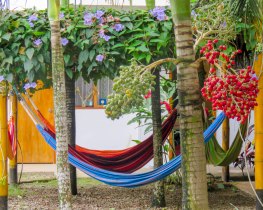 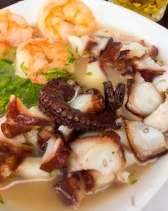 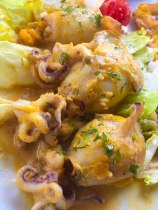 At times teams of fishermen can still be seen setting seine nets from the shore and hauling their catch in by hand. Other fishermen fight the waves to launch skiffs through the rough surf from the beach. 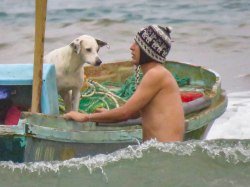 Sometimes the beach is a corridor of commerce with freshly caught fish being delivered by motorcycle from small villages further up the coast. Fathers can be seen taking their kids to school on the handlebars of their motorcycles, gently splashing through the incoming tide, hurrying to get there.  Outside of the small school every morning it’s like New York’s Times Square for ten minutes, with all the coming and going of motorbikes.  One morning a parade of open bed, stake trucks carrying school children dressed in different team colors honked and cheered its way, through town, to the school for a day of field activities.  Every evening there is a well-attended, robust soccer game on the beach. Just imagine the memories these kids will have!  Outside our hotel, a group of young men play marbles in the dirt road under a dim streetlight, using the light from their cell phones to help find stray ones hidden in the foliage along the road. In the morning we passed our neighbor, singing softly to herself as she gardened.

Our budget friendly and relaxing short-term rental at Rincon d’Olon included a very nice breakfast on the rooftop terrace prepared by the gregarious innkeeper, Chris.  He emigrated from the Netherlands to Ecuador six years ago after volunteering in the Andes and vacationing on the coast.  He is a great source of information for all things local and arranged several transfers and an excursion for us. 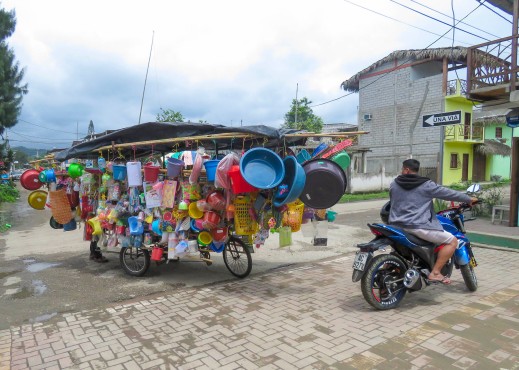 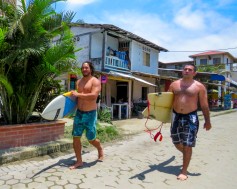 By ten o’clock each evening the streets are empty.  From our apartment at night we can hear the waves crashing onto the beach, along with roosters crowing – they start at one in the morning, seemingly on a campaign to discourage tourism – and dogs barking to each other. There is no traffic in this tiny four block square village.  Everyone walks in the middle of the road, roosters, dogs and cats included.  Restaurant owners and musicians will wave to you if they remember your visit from the day before.  Every day pushcart vendors wheel their offerings of fruit, eggs, cheese, clothing, kitchen supplies, etc. through town, each peddler singing out a different sales pitch. Sometimes the loudspeakers around the usually sleepy plaza blare: community news, music or appeals for donations to help a family pay funeral expenses.  One Saturday, families gathered to pay their respects at a memorial service on the plaza.  Later, the pallbearers hoisted the casket onto their shoulders, and solemnly carried it through town to the cemetery. A small marching band followed the coffin, playing El Condor Pasa, If I Could, by Simon and Garfunkle. 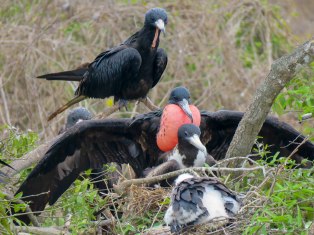 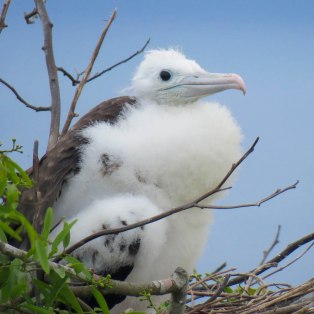 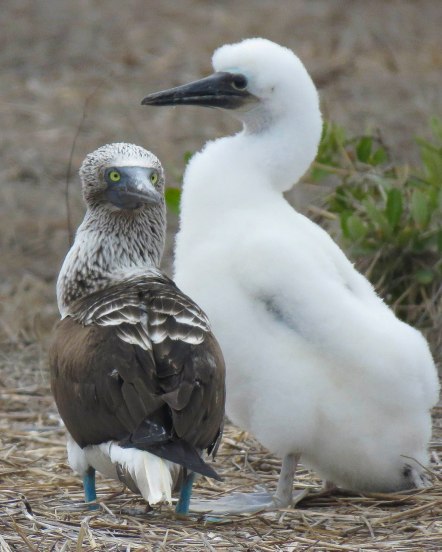 For a change of scenery, we took a day cruise out of Puerto Lopez to Isla de la Plata, an uninhabited island twenty-three miles off the coast, which is part of Machalilla National Park.  It is also referred to as the “budget Galapagos,” where we had a chance to see nesting blue-footed boobies and frigate birds.   Fifty dollars per person included shuttle transportation, boat ride, snorkeling gear, lunch, a three-hour hike with a licensed guide, and most importantly, the chance to see humpback whales.

Puerto Lopez hosts the largest fishing fleet on this part of the Ecuadorian coast.  Lacking a protected harbor, all the fishing boats beach on the shoreline to unload their fresh catch.  It is a hectic scene of never-ending activity that is reminiscent of an earlier era. 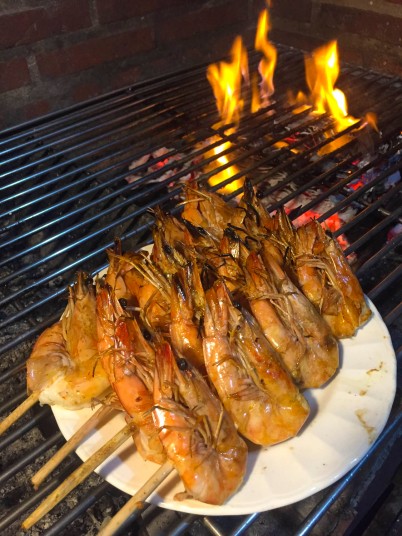 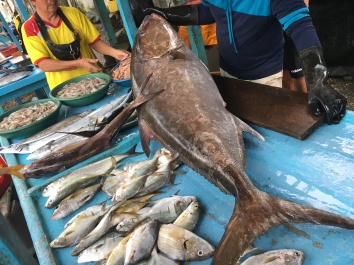 At Olon’s outdoor fish market, vendors sell a wonderful selection of fresh seafood caught locally at stalls set up along Ruta del Spondylus, named after a thorny shell used by the Incas in religious ceremonies.  The stalls are closed by noon, so we try to get there early for the best choices.  Two kilos of fresh large shrimp set us back six dollars.  After dark small tiendas fire up their street-side charcoal grills, offering chicken, pork or sausage shish-kababs to go, or you can stay and eat at tables set up in the street.  Several doors down from our hotel, at a little house with a barbeque made from an old fifty-gallon oil drum, two plates of fresh grilled fish with a beer cost five dollars for dinner. 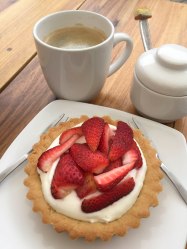 For a tiny place, this village also has a surprising number of refined, small niche eateries, most of them created by foreign surfers, (Swedish, Dutch, Brazilian, Argentinian, Venezuelan, Austrian, Russian) who fell in love with the waves here and never left. Wonderful and inexpensive empanadas ($1.00) along with the best papas fritas (French fries) can be consumed at Bahio which offers Argentinian fast food.  Next door, La Churreria has good coffee and desserts which rival any French bakery in Paris.  For more refined though still very casual dining, try the eclectic menus at Momo or Cotinga’s across the main road.  Cotinga’s might be the only restaurant in Ecuador where you can get home-made borscht accompanied by a shot of vodka, prepared by Olga, a Russian expat.

The only thing Olon really needs is a French inspired chef whose specialty is Coq au Vin.  Roosters, you’ve been warned!