With a vibe and cultural scene reminiscent of Florence, Italy, Cuenca continues to reap tourism awards as a hot new destination in South America. The city is investing heavily in infrastructure with a new tram line opening soon, but with all this positive press the streets are still mostly filled with Cuencanos (people of Cuenca) going about their daily lives.  Masses of flag-led tour groups are unheard of, as are masses of tourists in general.  We have been in Cuenca for five weeks and have never felt the crush of tourist season descending upon us. 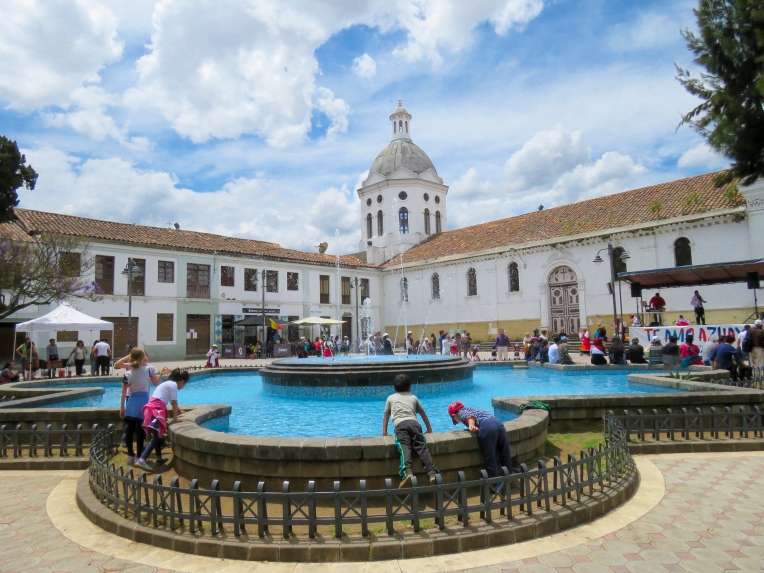 The city does a wonderful job supporting its craftspeople who still use traditional, made by hand, methods to create exceptional pieces in jewelry, textile, ceramic, wrought-iron, tin and copper workshops located across the city.  Toquilla straw weavers in the villages around Cuenca who carry unfinished sacks of Panama Hats into the city’s sombrero (hat) factories also need to be included into this group.  There are also several traditional felt hat tallerias (workshops) that cater to the indigenous women who live in the rural areas around Cuenca. The fine arts scene is also well represented with galleries and artists’ studios often next to traditional crafts workshops. To get the broadest experience of this vibrant arts and crafts community a tour through Cuenca’s most interesting neighborhood, El Barranco (the cliffs), and along its busiest street Calle Larga, is a must.  The colonial buildings that front Calle Larga back onto the cliff which overlooks Rio Tomebamba and the newer southern part of Cuenca. Wide stairs in several parts lead down to Paseo 3 de Noviembre, a shaded pedestrian walkway and bike path that follows the river for several miles.

This route actually starts several blocks west of Calle Larga at Cuenca’s Museo de Arte Moderno (Museum of Modern Art) across from Parque de San Sebastian which has a large fountain and several nice places to eat. Casa Azul, which has rare sidewalk tables that face the quiet plaza, and Tienda Café are good choices.  Most of the workshops won’t have business signs over their doors or street numbers, might open by ten, but will reliably close between one and three for lunch.

Just around the corner from the Museo Municpal de Arte Moderno at 7-49 Coronel Guillermo Talbot is the unimposing metal embossing workshop of Carlos Bustos. With his workbench by the door to take advantage of the daylight and his finished pieces hanging behind him, he works until the sun sets.  Still keeping the traditions of his family alive he offers embossed decorative pieces which can be traditional or whimsical.  At the end of the street a mural-lined staircase will take you down to the Rio Tomebamba; instead make a left onto Presidente Cordova and then veer right at the Y in the road onto Bajada del Valo. A few doors down is the felt hat Sombrereria of Camilo M.  Hanging from his walls are dozens of white felt hats in various stages of completion with name of the person who ordered it pinned into the brim.  Ask permission to take photos and you will be greeted with a smile.  Just past the hat maker,  Plazoleta Cruz del Vado merges with Mirador del Barranco.  This small plaza has several whimsical sculptures, largest of which depicts the traditional festival game Palo Ensebado (the teaching stick – climbing a greased pole) and a religious cross which celebrates the founding of Cuenca in 1557. 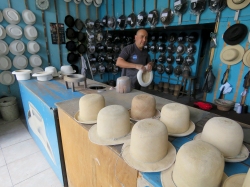 Walking along this scenic overlook, open doors reveal artists’ studios and Casa Museo La Condamine, a museum/antique store that houses an interesting menagerie of long forgotten Cuenca furnishings and antiquities.  Next door to them is the Prohibido Centro Cultural, an alternative museum that displays sculptures and art that could have been inspirational for your worst nightmare or an award winning sci-fi/horror film, depending on how you look at things.  It has a café. Further along the balustrade, musical chords waft from an instrument maker’s workshop, drawing you in, as the craftspeople test their work . Stairs from this scenic overlook lead down to Calle la Condamine and several coppersmiths. 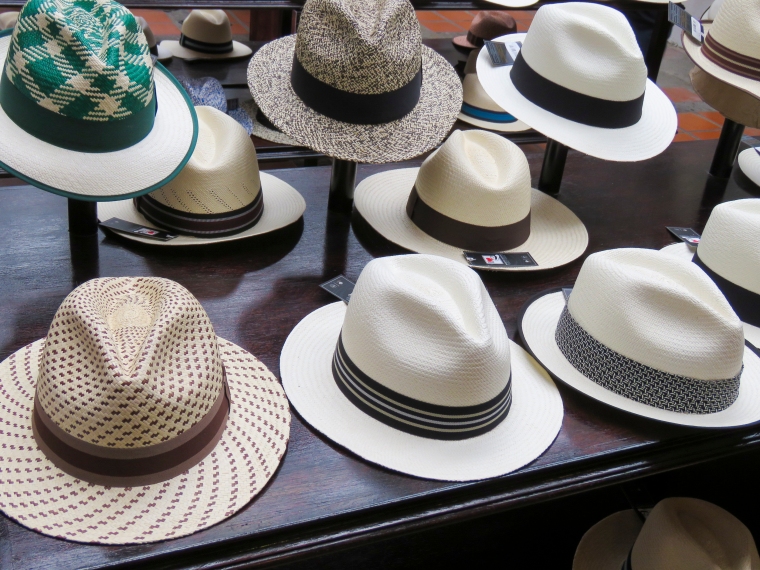 Rounding the corner onto Calle Larga is like returning from the Amazon to New York City. It’s tenfold busier, with the Mercado 10 de Agosto (Cuenca’s central market) accounting for most of the activity in the first block.  This a great short detour to get some exotic fruits or fresh bread and rolls from the numerous panaderias that surround it.  Diagonally across the street is the Museum del Sombrero de Paja Toquilla (free), a still operating panama hat factory where you can watch the manufacturing process and try on the finished product.  They have a lovely rooftop café, the only one in Cuenca, that overlooks the Rio Tomebamba and park below.  They offer you a free cup of coffee when you purchase a hat.  From the rooftop here you can see the jewelry workshop and store of Andrea Tello on Av 12 de Abril across the river. One of Cuenca’s finest silversmiths, having created filigree masterpieces that are in museum collections around the world, she earned the UNESCO Award of Excellence in Handicrafts in 2010.  Just a few doors away is the wide alley Bajada del Padron where you will find the workshop of an ironsmith who makes Pucara, a symbol given as a gift to bring good fortune and prosperity. The sculpture incorporates the Christian cross with images of the Sun and Moon to honor Pachamama. 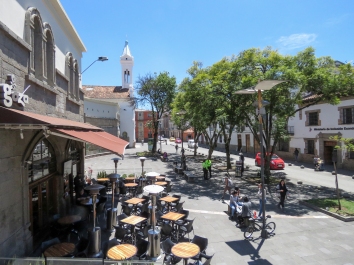 Continuing east along Calle Larga you will cross the intersection of Benigno Malo. For the next several blocks the restaurant choices are tremendous, with options for Arab and Indian cooking to gourmet Ecuadorian cuisine and everything else in between.  El Mercado and El Jardin offer fine dinning experiences that are very enjoyable. For a more casual environment try Goza Espresso Bar which has outside table facing a small park. The lower level of Museo Remigio Crespo Toral (free) offers the Café del Museo, which is truly an oasis of calm in this bustling city, has terraced outside dining that looks over the lush greenery along the Rio Tomebamba and Paseo 3 de Noviembre. The museum itself is worth exploring to see how Cuenca’s gentry lived at the end of the 19th century.  Or you can head to the Wunderbar Café on the Francisco Sojos Jaramillo stairway that leads to the Centro Interamericano de Artes Populares (CIDAP – free) which offers changing, monthly craft exhibits. 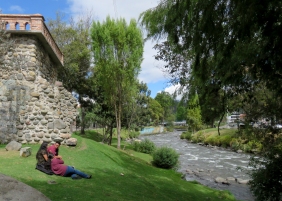 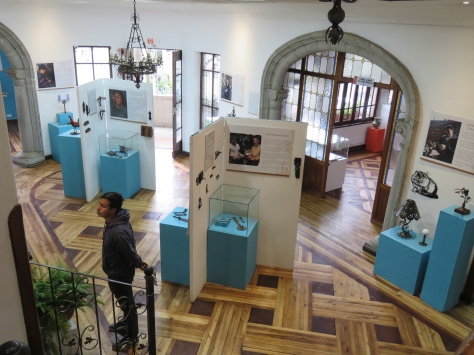 Back on Calle Larga the Museo de las Culturas Aborigenes looks unimpressive from its entrance, but the museum upstairs has an enthralling collection of 8,000 indigenous artifacts that spans 15,000 years and 20 pre-Columbian cultures, stone-age to bronze-age. Downstairs there is a very good, no-pressure gift store with excellent pricing. Next door is the fascinating studio of metal sculptor Julio Machado who creates hummingbirds and other animals in bronze and aluminum.  Stay straight on Calle Larga when you come to the fork in the road at Todos los Santos Church; this will lead you to a store front painter’s studio where his favorite subject seems to be the church you just passed. 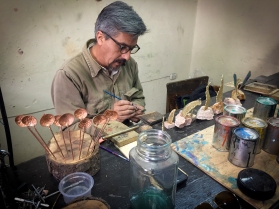 At the end of Calle Large at what once was the Inca city of Tomebamba, its terraced gardens still home to grazing llama, now stands Museo Pumapungo (free), one of Ecuador’s finest museums. The first floor offers changing contemporary art exhibits as well as a fascinating collection of artifacts discovered on site here. Upstairs features exhibits which represent all of Ecuador’s diverse cultural groups and their historic way of life.  Topping it off, there is an unusual exhibit of shrunken heads, tzantzas, along with how-do instructions in Spanish and English from the Shuar people of the Amazon.

Across the river from the Museo Pumapungo is Las Herrerias, the street of the iron forges, where several workshops create utilitarian and decorative works; to locate the workshops, just follow the sounds of hammers striking anvils. Plaza del Herrero, at the end of the street, has a very interesting monumental sculpture dedicated to the ironworkers who helped build Cuenca.  Be sure to try Tortilla de Choclo, a scrumptious corn pancake that is pan-fried on large griddles along the street in this neighborhood. 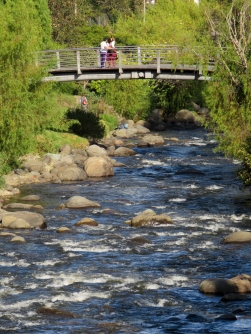 Artisans not in the Barranco neighborhood, but definitely worth the effort to visit, are ceramicist Eduardo Vega (internationally recognized for his decorative arts.) His workshop and home are a short walk downhill from the Mirador de Turi. Located on the new tram-line that runs through the historic potters’ Barrio Convencio Del 45, at 2-90 Mariscal Lamar, is the traditional, ceramic workshop of Jose Encalada where he and his son Ivan still form every piece using a potter’s kick-wheel. A few blocks over on Vega Munoz is the contemporary, ceramic studio of Eduardo Segovia where he creates whimsical decorative pieces influenced by South American traditions. Closer to the historic central part of Cuenca is the Mama Quilla silversmith shop on Luis Cordero. Here, Harley-riding Ernesto creates fine filigree pieces that reflect the cultures of the Andes. 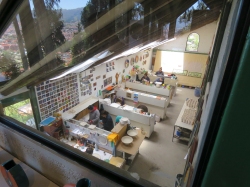 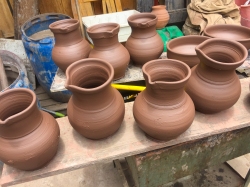 We enjoyed walking through El Barranco, and specifically Calle Larga.  The route we suggest here provides a wonderful overview of life and art in Cuenca.